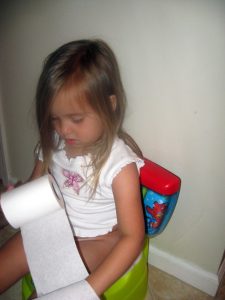 Well, my baby girl is finally out of diapers! I dare speak too soon as we went through this once before, but this time, I think it is going to stick because I waited for HER to be ready (not me)!

It was really not the best timing for me. I was having baby #4 in less than two weeks. I could have pushed this off forever and there is always something more important than potty training! Plus, I really did not know how to get through to her. Lainey is three and a half years old with older twin siblings. I thought for sure she would have the desire to be trained by now.

Then one day the stars aligned. My big kids had a field trip, and I was scheduled to chaperone. My childcare for Lainey fell through but luckily I was able to call a friend and set up a last minute after-school playdate.

To my horror, Lainey pooped in her diaper. My friend, whose daughter has been potty-trained for well over a year now, had to change a big, stinky diaper. She never mentioned anything about it, but Lainey told me when we got home. It’s not that I was embarrassed or ashamed, I just felt bad that my friend had to deal with it when she was doing me a favor!

This made me realize that it could be harder to get my friends to watch Lainey when I needed them. I began to talk with Lainey about how much she liked playdates with her friends. We talked about how all of them are using the potty now. I told her that their mommies were all done changing diapers and that she would have to wear big girl underwear if she wanted to go on any more playdates.

About a week later, Lainey asked to wear underwear. It was a Wednesday, not exactly how I planned it. You’re supposed to start on the weekend, right? Spending two days at home with the help of your husband and whoever else so you can limit trips out. But of course, I went with it.

The results? AMAZING. We took it day by day and she stuck with it, one success after another, and now this kid is totally out of diapers. Zero accidents. She even sleeps in big girl underwear! Awesome! Maybe it was fate that I waited so long and never really pushed her, but letting her decide on the timing was successful in this case.

If your kid does not seem ready, just hang in there! Eventually, he or she will be ready. It should NOT be a difficult process (ha!). And remember, no kid is alike. I should know this from having twins, but I still sometimes forgot. My twins potty trained at 24 months and 31 months. Lainey is now well over three and half years old! I really thought I was doing something wrong, but I just had to wait for her to be ready!

What is your potty training success story?

Cruising for Christmas Lights In & Around Jacksonville

How We Can Make the World a Kinder Place