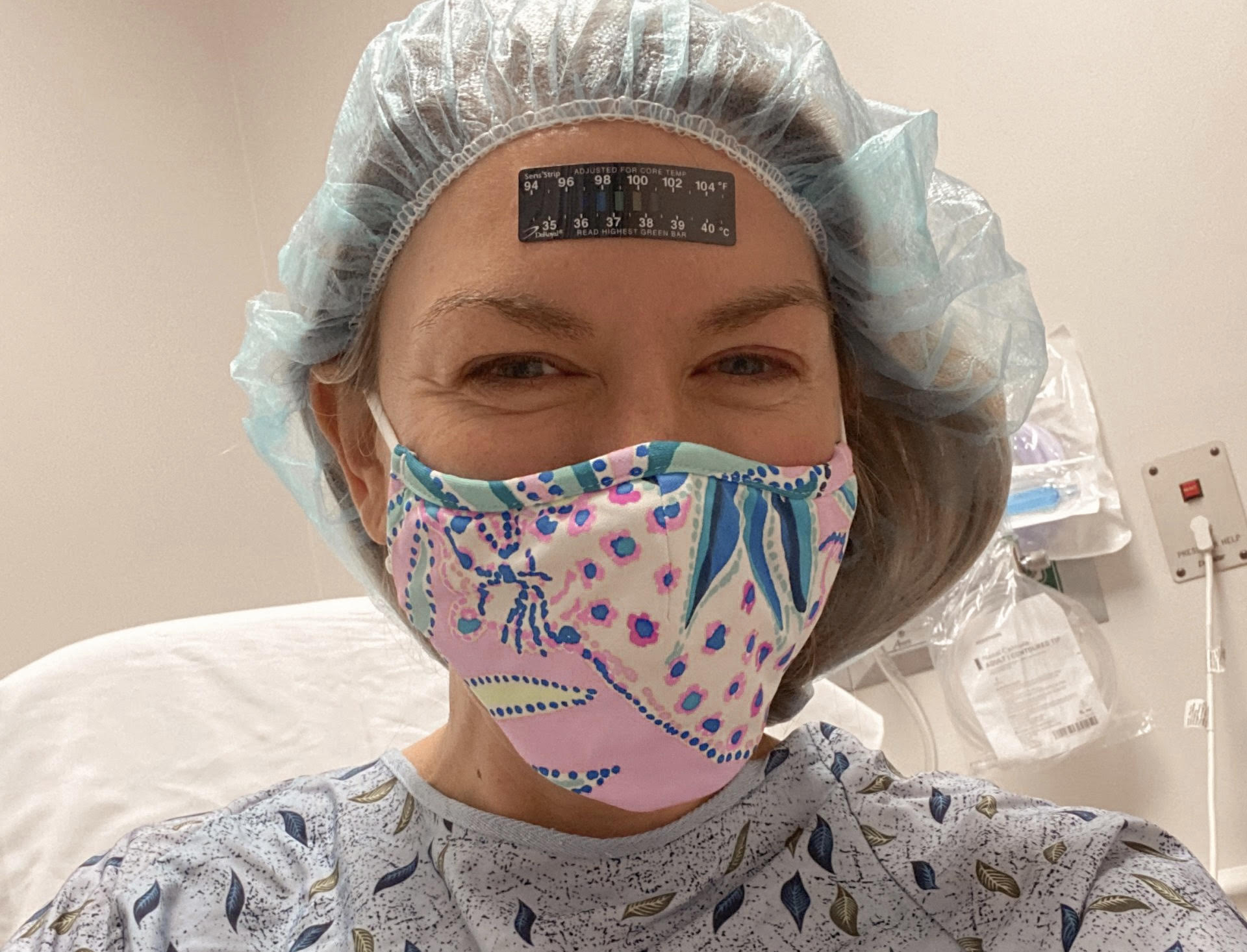 After months and months of deciding what to do and where to go, along with consultations and pre-op appointments, the day finally arrived for surgery. In the moment, this was the day I had been waiting for — the pinnacle of the experience. In hindsight, the actual surgery was really just a blip on the journey of the whole mommy makeover experience and was actually one of the easier parts.

I arrived at Ponte Vedra Plastic Surgery at 8:30 a.m., and my surgery was scheduled for 9:30 a.m. I was taken back to a little exam room where I changed into my gown and got some killer compression socks. The nurse set up my IV and started pumping me full of fluids. Dr. Rumsey and Melissa came in to go over everything, and the doctor got out a measuring tape and his Sharpie and started drawing all over where he would be making incisions and removing skin and fat. This was the last chance for me to stress my worry of going too big or small with my boobs (which by this point, he had heard many times from me.) They both reassured me I was going to love the new girls and everything would be great!  The anesthesiologist came in and went over everything that would be done during the surgery. One thing I didn’t know was that they actually intubate patients for longer surgeries (mine was around seven hours). Then I got up, walked into the operating room, hopped up on the table, was given some really happy juice in my IV, and BAM!

I woke up in recovery to Dr. Rumsey talking to my husband on the phone and a bunch of cute nurses discussing new handbags. I was super groggy and hardly remember much, but I did feel the need to jump into their conversation (shocker) and even made one of the nurses look up my friend’s new handbag line, Milly Kate Designs, on the computer.

Taylor was my nurse for the night, and she was a rockstar. I would not recognize her to save my life if I saw her today outside of the office because I was pretty drugged up, but she was awesome and at my beck and call all night. I was in more pain than I thought I would be. I have had three c-sections, and the tummy tuck pain was far worse the first three days than with the c-sections. I would say after day three, the pain got better and recovery was better than a c-section then, but DAMN. Those first few days were brutal. Your abs feel like you’ve been punched in the stomach repeatedly. Also, from being intubated for so long, they make you take deep breaths and cough to clear your lungs. HOLY HELL. Coughing with muscle repair is no joke. Actually, everything those first few days was no joke. Walking to the toilet, sitting down on the toilet, standing up in general. Thank God I had been doing a lot of squats at the gym pre-surgery, because I was using those quads to do everything. You don’t realize how much you rely on your core to do a lot of things.

The next morning, my husband came to pick me up, and I was headed home.  Also excruciating after a tummy tuck: a car ride. Ouch! Notice I’m not saying much about my chest. In the scheme of things, the boobs are just nothing compared to the pain of the tummy tuck and lipo of the hips. Not to say they didn’t hurt at all, they were high and tight and achy with some occasional sharp pain, but a total hayride compared to the tummy.

Now I was home, and the biggest most frustrating part of the journey was beginning: Recovery.

The Recovery: Feeling Depressed and Regretful

Recovery after a mommy makeover is a marathon. I was expecting to get home, be in a ton of pain, but be excited about my new body. NOPE! Recovery has been a total mind F&*$ that I wasn’t prepared for. So, I want to tell you some things no one told me about recovery.

I wasn’t prepared for the emotional rollercoaster that was the first few weeks post-surgery. Turns out that many people experience the blues after major surgery. Being in pain, not able to do anything on my own, confined to my recliner to sleep. Well, sleep? Who am I kidding, I didn’t sleep through the night for almost three weeks post-op. Then on top of it all, I was so swollen. You spend all this money and put yourself through hell to look better, but I came out feeling worse and fatter than ever. I cried a lot. For almost five entire weeks, I questioned if I made the right decision to do the surgery. I drove my husband insane standing naked in front of the mirror and pointing out all the stuff that was swollen and questioning if this was ever going to get better. Good news! It does. At five weeks post-op, I started feeling so much better. My body had healed enough to where I was back in my routine and swelling had started going down. At six weeks, I was cleared to go back to the gym which is my mental health drug. This was a great reminder to be kind to myself. We are our worst critics and after a major surgery, you really have to give yourself grace and patience.

Y’all. Swell hell is a real BITCH. I remember taking the compression off my tummy for the first look at my new flat stomach, and this is what I saw.

Yeah. I cried. I was lumpier and bigger than before. You see so many before-and-after pics of tummy tucks with amazing results, but what many are failing to tell you is that most post-op result pictures are taken 4–6 months after surgery. Your body has just gone through a major trauma, so of course, there is going to be swelling! I just wasn’t prepared for how much swelling. And turns out that it lasts a long time. I’m eight weeks post-op and am still a little swollen in the morning. Then by nighttime and a day on my feet and after a workout, the swelling really increases. Turns out this commonly lasts three months to a year. Ugh! Again, I’m learning how to be patient.

Lipo Is the Most Painful of Everything

Yep. Lipo. I was surprised, too. But since they go in blind and jab the crap out of you to suck out the fat, it causes more trauma and swelling than the other procedures. My hips are still quite swollen from the flank lipo (I hate the word flank), and it by far is the achiest of all the procedures. You just feel constantly bruised and numb. Even now when I run, it feels like bruised saddlebags moving on my hips. It’s very strange.

Sounds like it could be a new TikTok dance, but the “drop and fluff” is a real process (a long process in my case). When the implants are put under your muscle, your pecks hold them up high on your chest, looking like you had implants under your collar bone. Over time, the peck muscles release, and your implant drops down gradually into the base of your breast where the implants can then spread, or “fluff,” giving you a natural look. The timing of this varies for everyone, and in my case, it takes longer because I also had a lift. At eight weeks post-op, they have definitely dropped a bit but still have a way to go. Also, they aren’t guaranteed to drop and fluff at the same time, so often there is some asymmetry in the healing process. Again, I’m really learning patience with this surgery!

Not all Stretch Marks Go Away

This is totally TMI, but inquiring minds want to know. During the tummy tuck, your upper abdominal skin is pulled down, but also the skin above your pubic area is pulled up. This gives your pubic region (called the mons pubis) a little lift that you never knew you needed! It repositions the clitoris to a higher more exposed location which could result in better sex! Also, some women report it helps with urinary incontinence.

When I was spiraling after my surgery, I turned to Facebook for support groups. Turns out there are a few really great ones with thousands of women who have had surgery or are contemplating it. I turned here when I felt crazy and searched for other people going through the same stuff. Turns out there are a ton of women who are swelling just like me and have Frankenboobs (as they are referred to in the groups), just like me! I found women who had surgery around the same time as me, and we could compare swelling and incisions and crazy feelings, and it helped to know that I actually wasn’t crazy and everything I was going through was totally normal.

I’m eight weeks out and still have a way to go in my recovery and healing. My body will continue to change over the coming months, and swelling will continue to go down. In one of my groups, someone reminded me that it can’t get worse, it can only get better! So, this is my PSA to let everyone know who is considering plastic surgery that recovery is a long road to final results. This stuff takes time, and we have to be kind and patient with ourselves. Eight weeks post-op now, and I feel great and would totally do the surgery all over again (but maybe with slightly bigger boobs)!