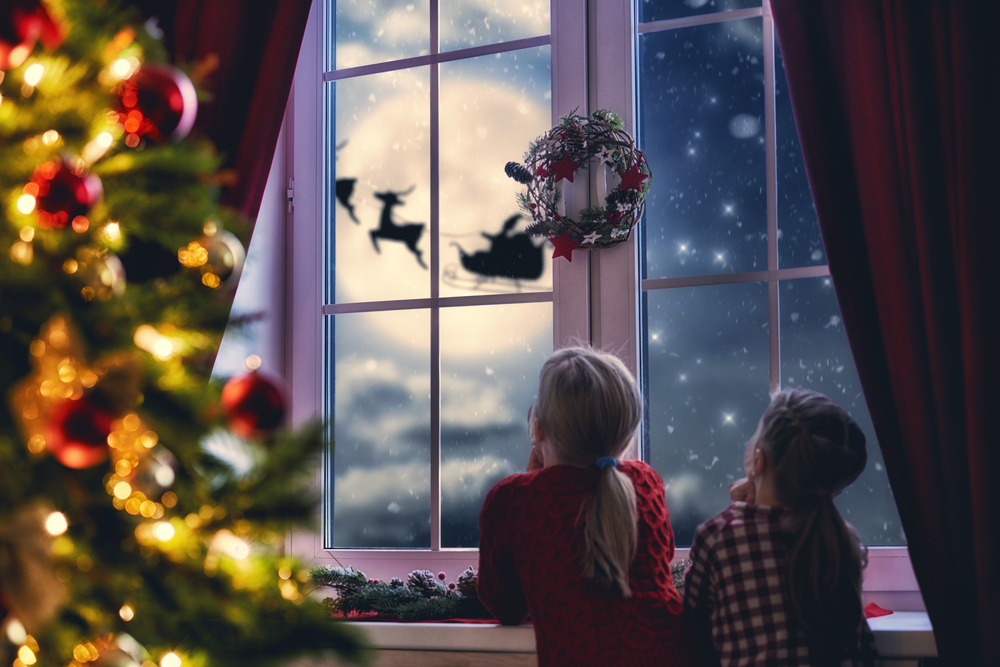 That most dreaded time has come: The time when your child has matured, shown curiosity, is questioning it all, and wants to know how it all happens… yep, it’s time to have “THE TALK.”

No, no… not that talk (that’s a whole other blog post). I mean the talk about the big man himself, Santa.

This all happened so quickly, even though, at the time, my son was 9 (almost 10), and it caught me off-guard. I knew our time was near, but I had hoped we would have at least one last Christmas with him enjoying the magic and wonder of the jolly old man visiting our home on Christmas Eve.

My son came home from school one day and said that his close buddy — let’s call him “Benjamin” — told him that Santa wasn’t real. I was shocked and crushed, and my heart sank. I could tell in his voice that he was heartbroken, too. I tried to remain composed because I hadn’t thought about how to deal with such a conversation — and part of me hoped it wouldn’t ever come up.

My internal monologue went a little like this: Do I continue “the lie” or allow him to ask more questions and be more honest about it? I mean, he’s almost 10; when is the right time? Am I too late? What is the right move? I know each family is different, and there are some families out there who don’t even do Santa, the Elf on a Shelf, Easter Bunny, or the Tooth Fairy like we do — because, you know, the REAL reason for Christmas, and OMG… where will I go with all of this??? My sweet kid will think his parents are frauds and liars and never believe a word we say or trust us again!

He said he told Benjamin that this wasn’t true and that Benjamin insisted there was no Santa because his parents told him so. Then my son looked at me with his big blue eyes and asked, “Is that true, Mama?” Hypnotized by his sweet, hopeful face, I quickly responded, “No. Benjamin doesn’t know what he’s talking about!” Then I immediately changed the subject.

Ugh, not my proudest parenting moment, but I didn’t know how to react, and I needed more time. My son never did say anything else about it… that day. A week passed, and he made subtle mentions here and there, but I still managed to dodge it and switch the topic.

Fast forward to another week when we had a school fundraising event at a local BBQ restaurant. It was a beautiful starlit evening, and we chose to sit at the picnic tables outside so the kids could play cornhole and hang out with their friends.

We had just finished eating, and the kids were playing. Suddenly, both of my kids come rushing to the table, breathless and talking over one another, “Hurry, hurry… go to the fence! Look up at the sky!” I was confused, and my back was to the fence; I could tell there was some commotion as parents crowded with their kids by the fence of the restaurant and had their phones in their hands. My son said, “Hurry, Mama, grab your phone and take a pic! Hurry!” He was crying.

I thought to myself, “Wait. What?” Then in a panicked tone and with tears in his eyes, he said, “I KNEW Benjamin was wrong; we just saw Santa! Mama, he is real!” All of this happened so suddenly but so slowly at the same time. He began to cry harder. My husband and I looked at each other, eyes wide, and our jaws dropped. We got up to see what the situation was. My kids explained that they saw a string of lights floating in the sky, and it was Santa! By the time we walked over, there was nothing to see in the sky. My son was so upset that we didn’t see what everyone else saw. My youngest son confirmed that Santa and his sleigh had glided across the night sky.

Now, I must mention that we live near a couple of military bases, and Cape Canaveral isn’t that far away. Seeing a rocket launch in the sky or helicopters doing night ops isn’t a big surprise and something they’re familiar with. But they said this was different. My heart broke into a million little pieces at that very moment.

At this point, we headed home, and no lie, we saw the string of lights in the sky — all of us! It did seem to hover in a strange pattern with rows of green lights, and my husband, a retired military officer who worked on and flew in many a helicopter, wasn’t even clear on what it was. My kids had many questions on the way home (mostly my eldest), and I just took him aside and said, “Let’s have a special date soon, and we can talk about all of this, and I can share with you what I know.” We agreed to go to his favorite restaurant the next week and have a special date night.

Fast forward through the longest week ever. I had been a ball of nerves, my stomach felt like it was full of butterflies and hummingbirds, and it was churning like the internal parts of a washing machine.

We arrived at dinner, and the hostess told us that the bar was open if we wanted to be seated immediately. My son looked at me, then her, and said, “No. We need a booth.” He knew there was a chance that he would get upset and that we needed privacy. I had studied things I saw online and posts that friends had sent me, and I memorized them and rehearsed them (thank goodness for my thespian background — it came in handy). I was prepared and knew exactly what I would say in my own words. After some appetizers, this is a little bit of how it went:

“So, I know you have a lot of questions about Santa, but before I tell you what I know, I want to make sure you are ready to hear it and want to know because after I tell you, your life will be changed.” He looked at me with puppy-dog eyes, nodded, and said, “Yes, just tell me.”

I proceeded to tell him that Santa was not a person and that Santa was an idea. That we are ALL Santas and that he is now one, too. I told him that for generations, kids are given the image of a jolly, bearded, old man in a red suit (sounds totally creepy in hindsight) to help teach the lesson of giving — that they are too young to understand. I reminded him of the many times he was given amazing gifts from Santa (which were actually from us) and that we expected nothing in return. Not even a thank you. We just wanted to see the happiness on his face as he opened the gift he always wanted, which made our hearts burst with pure joy. That he can participate and have that feeling, too. I told him he could now help spread the magic of Christmas for his little brother and pick out gifts, hide the sneaky Elf, and even eat the cookies we leave out for Santa. He was shaken as he didn’t respond immediately; I don’t blame him — he had a lot to process. He took a deep breath, paused, and said, “Wow, and that’s so sad that you didn’t have a younger brother or sister to do that for.”

Where I responded, “Yes, but I have you.”

There was more talk and explaining and still more questions, but all in all, he took it very well, and we laughed and enjoyed our dinner. My little man grew up so much that night. It’s an evening I will never forget. On the way home, he said in the car, “I’m glad you told me all of that in the restaurant because I didn’t want to cry.”

Oh, honey, I also wanted to… and still do. You are growing up way too fast.