My husband’s bond with our daughter has always been a special one. It may be because, from day one he was very much involved in taking care of her, I was so sick after my c-section from her birth. It may be because they have always looked exactly alike. It may be because my husband is silly and fun and jokes around with her in a way that I just seem unable to do.

Regardless of the reason, they have always had a thing. Even so, my husband makes sure to take our daughter out on Daddy-Daughter dates! 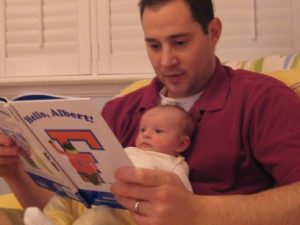 I am not sure where the idea came from, maybe one of the stacks of parenting books I have, or the Chick-Fil-A sign by our house that advertises them often, or because the head of my department at CSX shared with me once that he always took his son out to breakfast on Saturday mornings, and I shared that with my husband, who really liked the idea. In any case, long before my daughter and my husband really needed time together, or were even able to communicate verbally with each other, Daddy Daughter dates were already part of our lives.

They started when Mattie was very small, maybe about three. That year, every Tuesday, and sometimes more often, I would have meetings for the organization of which I was serving as incoming president. My husband would pick her up from preschool on Tuesday nights and together they would have dinner, get ice cream, or share a piece of Oreo pie at Biscotti’s in Avondale. My husband often worked late during the week, and since I spent so much time with her in the evenings, they would also have a date on Saturdays, painting pottery or going to the park.

When I became pregnant with our son, I was sick through the second trimester, exhausted from waddling around with a giant nine-pound baby boy in my stomach, working a full-time job and finishing up as president of the Junior League. On the weekends, Jon would take Mattie to the playground, swimming, or to Yobe so I could rest, sleep, work or email, as needed. But their time together also helped her know that even as we were able to welcome a baby brother, she was still a very important priority in her Daddy’s life. 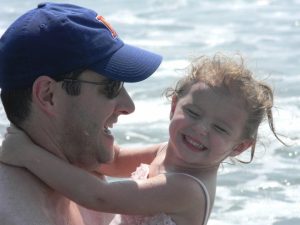 After Spencer arrived, especially in the beginning when he was “so boring” and “exhausting,” according to Mattie, my husband and I each made time to have a date with our daughter. We traded Saturday afternoon activities off with each other for several weeks, trying to ease her through the adjustment of a new sibling, especially since she was four and a half when Spencer was born and quite used to being the center of our world. Now that Spencer has gone from being “boring” and “exhausting” to “annoying” and “difficult,” and though my volunteer responsibilities have ended, my husband still works hard to have set time with our daughter, without me and without her brother. This is sometimes logistically difficult since we both work and weekends always have their own activities, but I think making the effort is worth it. It doesn’t happen every weekend, but we try to make it happen often enough that she looks forward to having them.

The most important thing that’s come of the time my husband spends with our daughter is that she is not afraid to share her feelings with him (or me) and talk to him about them, even though sometimes they are the “big” or “difficult” or “hard to understand” feelings of a five-year-old. My husband already says that no boy will ever be good enough for his daughter. I know that with her Daddy as an example, she’ll settle for no one less caring and loving of her than my sweet husband.

Here is a website with a Printable for a “Daddy Date Jar”: The Dating Divas

If you need more ideas or a gift for Father’s Day, there’s even a book called 88 Great Daddy Daughter Dates by Rob and Joanna Teigen.

What’s your favorite thing to do on a Daddy Daughter date?

Where to See Santa In & Around Jacksonville