WARNING– Somewhat gross photo below (but not with LL Cool J).

This post is for you as a mom (and about LL Cool J). It’s often that we don’t think about ourselves first so before we get back into bikini (or tankini) season, book an appointment with your dermatologist to get a full body check. And when they catch something early you can send me a thank you. Preferably in the form of wine (or tickets to see LL).

I was never a girl that had skin issues like acne. Never saw a dermatologist for anything. I tanned maybe 20 times in high school which was nothing compared to many of my friends who kept regular appointments at the tanning salon. Sunscreen wasn’t important unless we were going on vacation (I grew up in Indiana).

Fast forward about 15 years. I had a small spot on the side of my nose smaller than the size of a pencil eraser. It was red and sometimes peeled but no matter what skin care product I put on it the appearance did not improve. On top of finding a spot on my nose, I had just turned 30, prompting me to make an appointment with a dermatologist for a full body check.

If you haven’t had one, when they say full body they mean EVERY inch of your skin. She checked between my toes, under my arms, my booty and all of the other obvious places. When I showed her the spot I was concerned about she gave me a concerning look then a special cream to use for one week. If it didn’t improve she would do a biopsy. 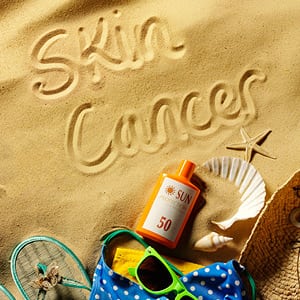 Well, it didn’t improve so I had a biopsy where she numbed my nose with a needle injection (OUCH!!!) that felt like a bee sting, then she scraped a tiny piece of skin to send off to the lab.

Then I had to wait. I hated that wait. One week later I was sitting on the table in the exam room and she cut straight to the chase. I had skin cancer. Basal Cell Carcinoma. It’s the most common form of skin cancer. I was stunned. For the past 10 years I had been using SPF everyday. She informed me that I would need to have a procedure known as Mohs. She also suggested I seek out a good plastic surgeon.

Oh my gosh. Now, I was seriously freaking out. I left the appointment and sat in my car and cried. I felt stupid for crying about it when so many people suffered from life-threatening forms of cancer. Mine wasn’t. Basal cell is just on the skin and does not spread to other parts of the body like Melanoma does. It can be disfiguring but can’t kill you. The key is to catch it early. (LL Cool J coming soon, stay with me.)

A month later I had the Mohs procedure. I laid back in a dental like chair where they numbed my nose using a series of needle injections (Again, OUCH!). Once numb, they cut a layer of skin out, put a bandage on me and sent me out to a waiting room with other patients that were riddled with similar bandages. I sat across from an elderly bald man who had 4-5 bandages just on his head!

While I waited they reviewed the skin sample under a microscope to see if they had removed all of the cancerous cells. If I was lucky that would be the end of this experience. I wasn’t lucky. They had to go back in one more time and dig deeper. Then I was bandaged up and told I was clear of cancer cells. When I saw the hole they dug in my nose I was horrified! I had no idea how a plastic surgeon could repair it.

Four hours later I was meeting with my plastic surgeon all gowned up, IV ran and ready for surgery. I had chosen the top plastic surgeon in the city (I was living in St. Louis at the time) and I was hoping he wouldn’t let me down. He explained how he was going to slice down the side of my nose and stitch it back together.

When I woke up I had stitches the shape of an “S” on my nose. I had to wear a bandage across my nose just like the celebs who get rhinoplasty (nose job) not to mention I had two black eyes. I went to work and hardly made eye contact with anyone while I wore this patch of shame for 10 days. After the stitches were removed I had to massage the area and keep Aquaphor on it for several days while it continued to heal.

Today, you would never know I even had surgery. I can easily cover up the slight scar with makeup. I could have kissed that plastic surgeon!!! I guess he WAS the best in the city. One month later I was dancing on stage with LL Cool J.

I wanted him to appreciate my new reconstructed nose but he had too many body guards around him for me to get close. That’s a post for another day. This experience made me even more diligent about wearing sunscreen. I can’t erase the past but I can certainly try to prevent skin cancer in the future. This especially goes for my kids. Don’t overlook your child’s skin because the damage that happens to them now will haunt them in their 30’s or later.

Here’s what I learned through all of this:

I hope this is the kick in the pants you need to book your appointment now! And stock up on products for you and your kids while demand is lower.

Take care of your skin Mommas and “Momma said knock you out!” Okay, that was silly but I do love sunscreen and LL Cool J.

3 Things You Need to Know As a Parent With Cancer