Around Christmas time last year, I came across a Facebook post from my friend regarding Santa and Christmas presents. The post was about whether or not gifts from Santa were wrapped or unwrapped. It had never occurred to me that this would even be a topic of conversation, but what a topic it was. It ended up being split right down the middle; half of the people wrapped their gifts from Santa while the other half didn’t.

Growing up our presents from Santa were always wrapped. That was part of the fun to me; waking up Christmas morning, seeing all the presents, waking up my parents, and finally opening up the presents to see what Santa brought. The only time something wasn’t wrapped was if it was too big to wrap. I got a bike one year, and that wasn’t wrapped. Another year I got a much-desired dollhouse that wasn’t wrapped either. But most all of our presents from Santa were wrapped. We didn’t have a special system of color coding Santa presents (although I do like this idea), but the ones from Santa just had our names on them. The ones from our parents were from “Mom and Dad.” 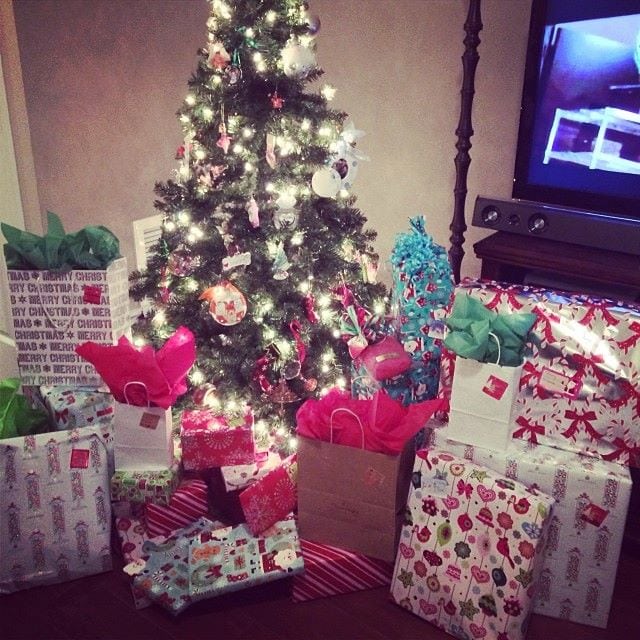 Now it is my family’s turn to have our Christmas morning traditions, and we still will have our presents wrapped from Santa. I just love seeing a big Christmas tree with wrapped presents underneath it. We might have one bigger gift from Santa that would be more fun to be unwrapped and set up, so we will do that (I can’t give it away before Christmas!), but everything else will be wrapped!

When this post came up on Facebook, I couldn’t believe so many people had their presents from Santa unwrapped. They would wake up Christmas morning and rush to the tree, and all of their toys and gifts would just be out ready for them to play with. Even though this wasn’t how I grew up, I could see the excitement of doing it this way.

From what I read from the “non-wrappers” it seems the only disadvantage was the potential snatching and fighting between kids that just saw toys and ran full force, not noticing what was for who. How does your child know what bike is his? Or what “big” toy has her name on it? I’m sure every family has a method of separating gifts out, but I would love to know how!

Some noteworthy advantages are no wrapping paper mess! (But where is the anticipation?!?) And of course, everything can be put together! I’ll admit getting those nearly impossible to open plastic packages ripped apart or untying the 450 twist ties on the back of a toy is just as annoying as the child standing there whining for you to hurry up! But still, people, including me, are very passionate about how their Santa presents are delivered, and they can’t imagine doing it any other way!

I’d love to know what you and your families doing with presents from Santa…are they wrapped or unwrapped and why do you do it the way you do? Leave a comment below!

COVID-19: Your Trusted Source for Answers You Need | Baptist Health 4Her