“I see two heartbeats.” In October of 2009, those were the scariest words I had ever heard. Had I heard the sonographer correctly? Were there really two babies? Yes. Twins. Identical twins. I panicked. Were we ready for this?

My doctor came in and talked us through the risks associated with having twins, especially identical twins. But as my doctor continued to outline the risks, including his warning of the possibility of Twin-to-Twin-Transfusion-Syndrome (TTTS), I wasn’t really listening. I was still processing the fact that I was carrying two babies. I vaguely remember him saying TTTS was rare (occurring in only 15-20% of pregnancies with a shared placenta), so I didn’t give it much thought. But I should have.

By late December, my husband and I were slowly beginning to wrap our heads around the reality of raising twins. I was 16 weeks along, and our next appointment with our high-risk doctors would hopefully tell us the babies’ gender. During the ultrasound, we were excited to learn that we were having boys! But that excitement quickly changed to apprehension as the doctor told us that the babies were beginning to show signs of TTTS. We were scheduled for a follow up the next week.

I went home and began to research TTTS. I didn’t like what I saw. TTTS is a disease of the placenta where there is a connection of blood vessels in the shared placenta, which results in an unequal sharing of blood between the babies. The “donor” baby receives less blood and amniotic fluid and can become anemic. The “recipient” twin receives too much blood which can eventually overload the cardiovascular system, resulting in cardiac failure. If TTTS is left undiagnosed and/or untreated, there is a 90% mortality rate for both babies. And even with early detection, the disease often progresses very rapidly. I tried not to dwell on the statistics, but it was a tense Christmas for our family.

The following week at our next appointment, my doctor explained that now it wasn’t a question of if I would develop TTTS, but when. The following Monday, January 4, 2010 found me back in the ultrasound room. I was now 18 weeks along. Another ultrasound revealed that the amniotic fluid levels had continued to decrease in the donor (Baby B) and increased in the recipient (Baby A). Baby B had very little amniotic fluid, and his bladder was barely visible. The diagnosis was confirmed. I officially had Twin-to-Twin-Transfusion-Syndrome.

Treatment options were discussed, and one option was to be referred to the Fetal Therapy Center at the University of Miami for a consultation with Dr. Ruben Quintero. There are only a handful of centers in the country that perform laser surgery to treat TTTS, and I appeared to be a good candidate for the procedure that would essentially “disconnect” the placental blood vessels linking the flows between the babies. The success rate for the surgery was close to 90% for survival of one baby, and a 70% chance that both babies would make it. Remembering that TTTS has close to a 100% mortality rate if left untreated, there was no discussion between my husband and me. We were going to Miami. That very afternoon I spoke with Dr. Quintero’s office, and after reviewing my file they wanted to see me as quickly as possible.

By Tuesday night we were in Miami, awaiting our consultation on Thursday morning. I don’t think I slept much that night. Knowing how quickly TTTS can progress, I wondered if the babies were even still alive. I was too early in my pregnancy to feel much movement.  The ultrasound the following morning would let us know.

“I see two heartbeats.” This time, these were the sweetest words I had ever heard, as the sonographer confirmed the next morning that both babies were, indeed, still alive. The disease had progressed in the few days since we had left Jacksonville, with Baby B’s bladder no longer visible, and he had very little amniotic fluid. His amniotic sac was essentially shrink-wrapped around him, making it impossible for him to move. But, both babies were still alive.  I was scheduled for surgery the next day. 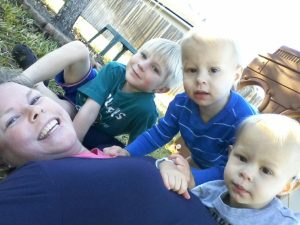 On Friday, as I was being prepped for surgery, I found myself wondering whether they would survive the procedure. I knew that the survival rates following surgery were positive, but it was still a possibility that at least one wouldn’t make it. I was awake for the procedure, and because the surgery was performed via a camera inserted into my abdomen, I was able to watch the process unfold before my eyes. I was amazed when toward the end of the surgery I was asked if I wanted to see my babies. Suddenly there was Baby A’s tiny hand on the screen, followed by his face. Because Baby B had so little fluid and was in an awkward position, it was difficult to see him. What I did get to see was his tiny chin tucked against his chest, with the smallest whisper of an amniotic sac visible between his chin and chest. He looked like he was covered in saran-wrap.

I was overwhelmed with relief when Dr. Quintero and Dr. Kontopoulos stated in the OR that they felt the surgery was a success. However, the first 24 hours following the procedure would be the most risky. I was exhausted after the surgery, but again found myself unable to sleep. Would the babies survive the night?

Early Saturday morning the sonographer arrived to do one more ultrasound to view the babies. I was so nervous, as was she. I believe she was hoping for a positive result as much as I was. She switched on the machine, squirted gel across my belly, and began the ultrasound. She turned to look at me. “I see two heartbeats.”

Following our incredible surgery, the babies did amazingly well. They developed normally, had good weight gains, and normal fluid levels. Viewing the ultrasounds toward the end of my pregnancy, you never would have known that there had been a life-threatening issue. I delivered at 37 weeks. On May 15, 2010, we welcomed Jacob Nathaniel (Baby A, the recipient) and Cole Alexander (Baby B, the donor) with Jacob weighing in at 6 lbs 9 oz, and Cole weighing 5 lbs 12 oz. Very respectable weights for any twins, let alone survivors of TTTS.

We were so incredibly blessed and lucky during this pregnancy. Blessed to have an OB practice who were knowledgeable and aware of TTTS. Blessed to have an incredible high-risk practice right here in Jacksonville who were very proactive and willing to monitor my pregnancy closely. I had frequent ultrasounds, and my TTTS was caught early. We were blessed to have made it to Miami, and to have had a successful treatment with an amazing surgeon.

Unfortunately, many others are not so lucky. In the past two years, through various online TTTS groups, I have met hundreds of families who have faced TTTS. Some, like me, have two babies who have survived TTTS. Too many however, have lost one or both twins to this awful disease. In some cases, their TTTS went undiagnosed completely. For others, the diagnosis came later in pregnancy, either because they did not receive early and frequent ultrasounds, or because the TTTS progressed so rapidly. And for some families, they were diagnosed early, had incredible doctors, received great care and treatment, but TTTS still claimed their babies’ lives.

TTTS is an awful disease, and while it is relatively rare it is nonetheless devastating. But there is hope for families dealing with this disease, and the key to that hope is awareness. If you know someone who is pregnant with identical twins, please help to spread that awareness by encouraging her to visit the TTTS Foundation (www.tttsfoundation.org). It may help to save a life. Or two.