“Make a rainbow cake,” he said. “It will be easy,” he said. Words from my husband John that inspired me to be an awesome mom (more awesome than usual) and actually bake a birthday cake this year for my three-year-old. For those of you who know me, you know my recent obsession with cake pops. I really, really love cake pops. I had already ordered them for Brendan’s birthday party so I had no intentions of making anything, let alone a 6-layer cake.

But this year Brendan’s birthday fell on a Friday, which meant a weekend of celebrating. Friday night was designated the “family party night,” and included all the grandparents. This was a perfect opportunity to offer a potentially huge disaster of a cake and not feel completely horrible about it. 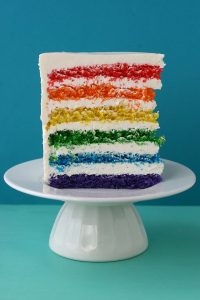 When I googled “rainbow cake,” I immediately felt a little inspiration and a bit of fear (by the way I have no clue how John even came up with this idea). The images all looked amazing, but I knew the amount of effort that a cake like this would take. With a crazy toddler and a six-month old vying for my attention, my motto these days is “keep it simple.” One of the first results however, was to Martha Stewart’s website (love Martha Stewart’s website, another dose of inspiration). She had featured a rainbow cake by food blogger Kaitlin Flannery from the Whisk Kid on her show. The best thing about this link? A video clip of the cake being made. OK, let’s do this…

So I made my shopping list. Went to Michael’s and picked up some cake making tools: an off-set spatula (how I never owned one of these as a culinary student and a former employee of Sur la Table beats me), a box of Wilton food coloring, some gel icing pens (and the almost-disastrous icing writing pen) and some sprinkles (Brendan loves sprinkles).

I’m not gonna lie, this cake took me a LONG time to make. It was a miracle that I was able to get the basic cake with frosting completed with both Brendan and my sweet little Audrey at home. I tried really hard to get Brendan to help, but after the batter was made he lost interest and hit the toy bin.

Tips for Mom’s Who Like to Bake (and are brave enough to make a rainbow cake):

I think this cake looks amazing as a plain, white cake. There really is an “OOOH and AHHH” moment when you slice that first chunk and hold it up to show your guests. But this was a cake for a three-year-old, who loves Team Umizoomi, so I was inclined to create something even more amazing. Luckily, the day I made this cake, I also ran into a friend at Michael’s. I was telling her about my plan and she must have sensed some fear and doubt in my voice. She then told me how much she loved making cakes and cupcakes for her kid’s birthdays, because no matter how horrible they may turn out, you made them, and that makes it so much more special. Thanks Kristen 🙂

As you can see, I attempted to free hand “Bot” from Team Umizoomi. I did use a picture to go by and I have to say I was satisfied with how it turned out. If I was to make this cake again, and decorate it, I would actually use the food coloring to color the extra buttercream frosting. Then use pastry bags and tips to draw. The “writing pen” I bought almost ruined this entire cake. As I was writing out Happy Birthday, the blue icing started to run and bleed down the sides. I almost cried. Somehow, I managed to scrape off all the drippy letters, draw my Bot using the gel icing pens and also write out Happy Birthday using the same gel pen. John had already received a text saying “this is all your fault” before my fix…. crisis averted.

Here is the link to recipe for the Rainbow Cake on Martha’s site. I would love to know if anyone has ever made this, or has any plans to!!