Going to Disney World is practically a rite of passage for families on the First Coast. I grew up going to the Magic Kingdom, and once my husband’s military service was finished and we were back in Jacksonville, I was anxious to give my children the same magical childhood memories that I had been able to enjoy. And while our first family trip to the parks was magical, it was also my first trip post-partum. It can be hard to feel stylish and attractive as a new mom, and that feeling of being frumpy was only magnified when I was standing next to these gorgeous Disney princesses.

Then I discovered Disney Bounding. Created by fashionista Leslie Kay, the idea is for adults to be able to dress as their favorite characters by using the clothes they already have in their closet. Instead of schlepping around the parks in mom clothes, I could find a way to show off my love for Disney while still looking stylish! And come on, ladies, let’s be honest: if you could dress up as a princess, wouldn’t you? Disney Bounding lets you dress up, in an age-appropriate and socially acceptable way… and feel fashionable to boot! I’ve worn Disney Bound creations every time we’ve visited the park, and each time, I’ve loved it more. The cast members and characters pay you extra attention, and guests notice and pay you compliments, and it really helps get you into the Disney spirit. Even Disney has gotten in on the action, with the Disney Moms Panel encouraging moms to try it, and official Disney quizzes to help you decide who to Disney Bound as next. Interested? Here’s how to get started. 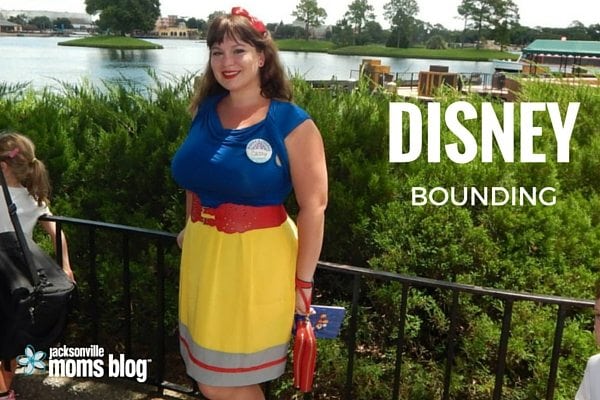 The idea of Disney Bounding is not to dress exactly like the character. Instead, look at your character as your fashion inspiration. If Ariel were to get up and pick out something to wear, what would she choose? You might choose a green skirt and a purple top, or a blue dress with some nautical accessories. For Snow White, you could pair some yellow pants with red shoes and a blue top, and find some apple-themed accessories to top it off. It’s about putting together an ensemble that honors the character from what you already have in your own closet. You’re not trying to replicate exactly what the characters wear in the movies. One of my recent Disney Bounds was as Minnie Mouse, and for that, I kept it simple: a yellow pair of sandals, a red and white polka dot maxi skirt, a black tank, a yellow necklace, and a red headband. I already owned everything, which was a huge bonus. Look at what your chosen character wears to get inspired, but don’t feel that you have to mimic their outfit. And the best part is, you can still be comfortable! Leslie Kay says to ask yourself if you would wear this outfit to the mall or out with your friends – if the answer is no, then it’s too costume-y. 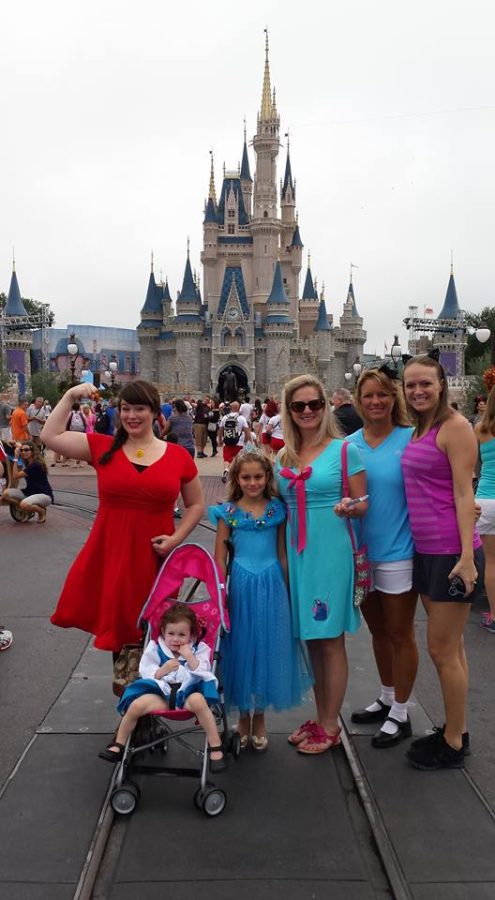 2. Make it a Family Affair!

I really enjoy getting my kids in on the fun, too. Of course, they actually can wear costumes and look absolutely adorable to boot, so I plan my Disney Bounds around them. When my daughter and I went last year for a girls trip, I found her an adorable replica of Belle’s blue village dress… and so I made a Gaston outfit to match her, which was both adorable and funny. Last month, we took my son to the Magic Kingdom for the day, and he wanted to wear his Mickey Mouse shirt. So the three of us had a Mickey and Minnie theme, with my son in his Mickey get-up, and my husband and I Disney Bounding as Mickey and Minnie. Now, my husband isn’t really interested in any kind of Disney fashion, but luckily, I can make an outfit for virtually any character out of clothes he already has in his closet. He can go along with it because he doesn’t really need to do anything. So for Mickey Mouse, all he had to wear was a pair of red shorts and a black shirt. The pictures looked amazing, and it was SO easy to do! 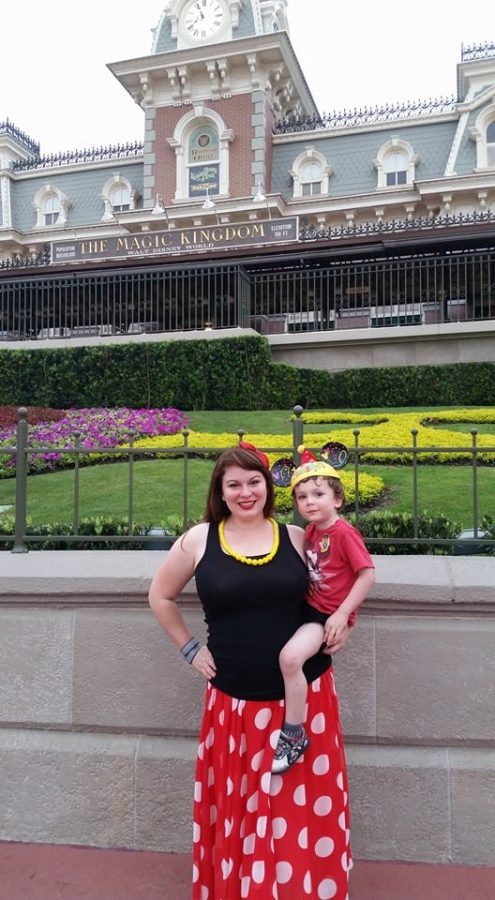 3. Expect to Get Extra Attention From the Characters

The first time I ever tried a Disney Bound, it was as Cinderella for my 30th birthday. The first character we met on that particular trip was Tiana, and as soon as we approached her, she noticed! Other characters likewise noticed and changed their interactions accordingly. It’s a quick way to add some extra magic to your Disney vacation, and make your time with the characters more personal. When I’ve dressed as Snow White, every cast member I saw referred to be as “princess”; as Cinderella, I was able to joke with Rapunzel about shoes. Even other guests notice! 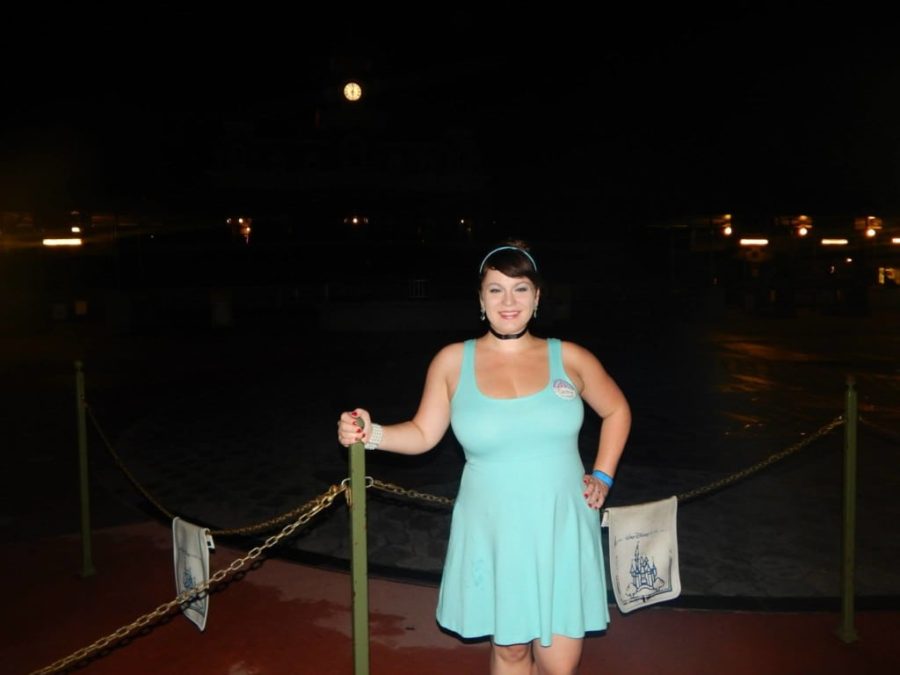 4. The Possibilities are Endless

There’s literally no shortage of who you can dress up as. You can dress as any character you want: male or female, human or animal. The only limit is your imagination. With “The Force Awakens” reigniting the Star Wars craze, and Star Wars Land being built at Hollywood Studios, maybe you might want to craft an outfit that pays homage to Darth Vader, or gives a nod to Rey, the newest heroine of the Star Wars saga. If villains are your thing, you can use someone like Maleficent or Mother Gothel as inspiration for a really killer look. Or if you have one character that you really love – like, say, Anna – then you can reimagine a different look each time you visit the park. There are even people who make Disney Bounds out of their favorite ride! So if you really love the Enchanted Tiki Room, there’s a Disney Bound for that, too.

So you’ve picked out your outfit, you’ve planned your trip… now all that’s left is to soak it all in! Put on your brilliant Disney Bound, and enjoy it!

Today Is the Day for You to Love Your Body

Have You Seen My Hair?