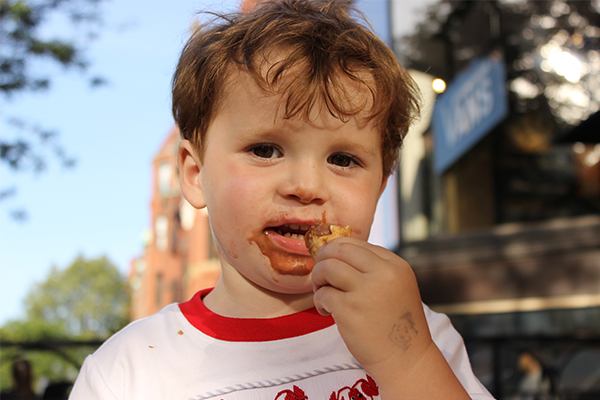 Kids say a lot of things — some are sweet, some are loving, some are hilarious, some inappropriate, and some just completely maddening — and by that, I mostly mean the high-pitched, whining of “It’s not faaaaaaaaiiirrrrr!”

Every time this comes out of my four kids’ mouths, it’s all I can do not to lose it.

I get it. They’re young. It’s my job to teach them about life. Right now their view of the world is home and school, maybe the playground and Grandma’s house. Not getting the same size cookie or the same amount of Easter eggs, in their perspective, seems arbitrary, unjust, and without reason. To them, it is unfair. I’m sure I felt the same at age 3, toddlers being who they are. When one sibling gets something it’s only reasonable for the other three to expect the same, even though I can’t magically make a fourth Oreo appear when there’s only three left in the box. It’s even harder when I hear the whining from my older children — who do, to a certain level, know why we collect toys for others at Christmas and donate our lemonade stand dollars instead of keeping them.

I’m not trying to be overly harsh on them, but when you try as hard as you can to provide what they need — and more than that, what they want (within reason) — hearing “It’s not fair” just makes me want to burst my buttons. To me and my grown-up self, they are being ridiculous. And I know I have 30-plus years on them. I don’t let them watch the news, but I know there are kids who go to bed hungry, in need of shoes that fit and books to read. I know that my kids, already, even at their young ages, have light-years of advantages over many children around the world.

So how to balance the scales, to make them see that not watching as much TV as their sister did earlier that day not only isn’t the end of the world, it’s not even a big deal? Or that having to eat their dinner to get dessert is actually a blessing because it means we can provide them with food. Is that even possible? Maybe not while they’re this young. I’ve tried. And tried again.

“Life isn’t fair.” Yeah, I might have said that a few thousand million times. This usually just makes them a little madder. Also, “Do you want me to make things really unfair, young lady?!” Or “How about saying thank you, Mom, for bringing me to ([insert fun place]??” These are all my snarky responses at the end of a hard day. (I know none of those are helpful.)

There are many things I try to DO to help them start to see why complaining “It isn’t fair…” is such a completely uncool thing to say. I ask them to make their lunches, clean up messes they didn’t make, put their laundry away and clear their dishes. I expect them to help bring in the groceries, say please and thank you, write thank-you notes for gifts, and thank whoever made dinner. They are expected to watch out for their younger siblings and help them at all times. We take an angel at church off the angel tree and I explain we are picking out toys for someone else. When they get money selling brownies and lemonade, before they even set up the stand, I let them know it’s to give away to someone who needs help. We donate items to their school toiletry drive and Christmas gift drive, raise money for the school walk-a-thon and generally try to show them, on a larger level, how much they need to appreciate what they have.

Mostly when they go into the “It’s not fair” whine, I don’t respond at all — I’m trying to think of a way to gently put into perspective for them in words why their complaining isn’t, well, fair.

Truthfully, I know they won’t really get it, not until they are several years older and have a broader sense of how unfair and unjust the world is. And they may not fully even understand where I’m coming from until they have families of their own. Only then will they realize the time, effort, and emotions that go into parenting — and working endlessly to provide for someone who doesn’t always appreciate it or understand how much you love them. But until then I will keep trying to show them and explain patiently why “It’s not fair!” is such an unfair thing to say. And maybe buy some more Oreos (for myself).

My Child, My Choice: Why I’m Sending My Kids Back to Public School