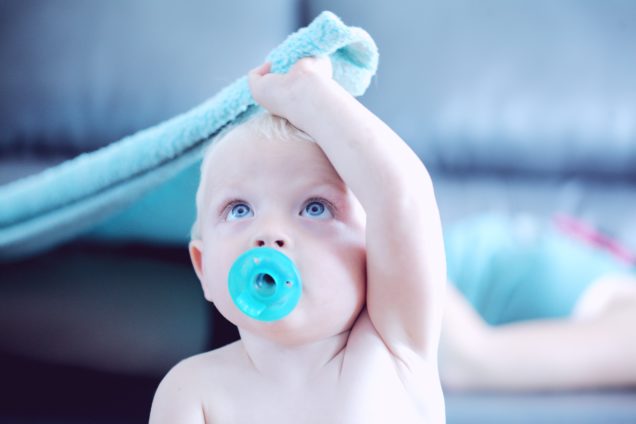 I first planned to write this post about four months ago. I had already gone through the process of getting rid of pacifiers with two of my daughters years ago, and I was preparing to do it with my third. I knew what I was going to write in my post: “You are your biggest barrier! It will be harder for you to just do it than it will be for them to lose it.” I felt confident in my plan to get rid of my last child’s pacifier. I was going to snip the end of it off with scissors. She would be fine. I would be fine.

I think most parents who have a child using a pacifier set some kind of deadline for when they will get rid of it. For our kids, I always had the goal to get rid of it by 2 years old — for ambiguous reasons like something the dentist said, or maybe what I thought was socially acceptable? Well, the deadline came to snip the pacifier and I needed an extension — and on this blog post, as well!

I started exhibiting the behaviors I was planning to warn against in my unwritten blog post. I was making all kinds of excuses for why it wasn’t a good time (e.g. we were about to go to Disney, we had family coming to visit, she had been extra difficult lately). I would worry about my daughter being sad without it and start to feel guilty. I would tell myself, “Her pacifier makes her so happy! I don’t want to take away something that brings her comfort.” Then there was that part of me who wanted her to stay a baby forever because she’s my last and she would seem less like my baby without her pacifier. I was being a hypocrite and I knew it, but I still couldn’t get myself to pull that baby plug!

Finally, I was ready. I started to notice that the pacifier was sometimes contributing to my daughter’s bad behavior — she would speak and act like an infant if we let her use it outside of her crib. So last month I clipped the pacifier. Yay! Clipping the end of the pacifier is the method I’ve used with all of my daughters and I highly recommend it. Get rid of all of your pacifiers (no turning back) except one, and cut the end off. Don’t let your child see you do it — you don’t want them thinking this is your fault. They were sad at first and wanted to keep the snipped pacifier. They cried a bit more than usual for their first naptime/bedtime, but by the next day, they were over it and wanted nothing to do with their broken pacifier anymore. They were fine. I was fine. Everyone was fine!

So here I am telling you, four months later than originally planned, that when it comes to getting rid of your child’s pacifier, you are your biggest barrier. It will be harder for you to just do it than it will be for them to lose it. Knowing that may not make it easier and, like me, you may have to wait until you are ready. But more likely than not, it won’t be as bad as you think and everyone will be fine.

Does your child use a pacifier? What methods have you used to get rid of it?

Prematurity Leaves Scars (You Just Can’t See Them All)

Why We Love The ‘No, David!’ Books