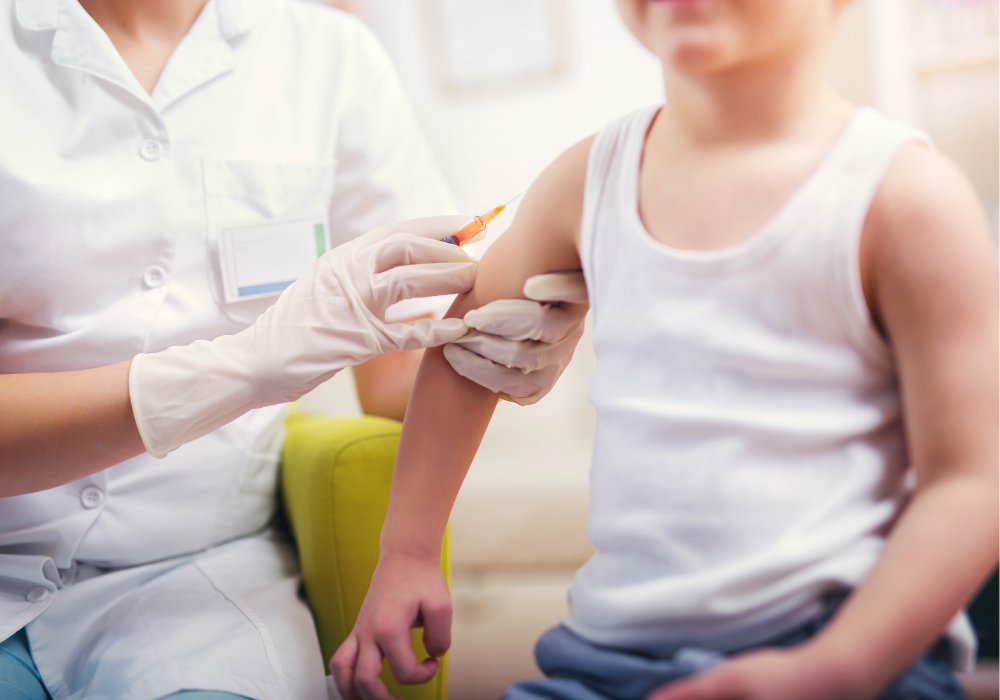 It’s the topic dominating conversations in online forums and parenting groups, and with 764 cases confirmed nationwide, the 2019 measles outbreak is now the largest since the disease was declared eliminated in the United States in 2000.

Florida is among the 23 states to report measles cases. According to the Florida Department of Health, two measles cases have already been reported this year. Both individuals had recently traveled out of the country and neither had documented vaccination.

With all the buzz surrounding measles, Matt Paton, MD, a pediatrician with Baptist Pediatrics, answered some of the most common questions he gets from parents.

What is measles?
Measles is a highly contagious, viral illness that occurs worldwide. It was considered eradicated from the United States in 2000, but has made a resurgence over the last several years. Symptoms consist of fever, malaise (feeling really bad), runny nose, cough and conjunctivitis (pink eye). After several days, patients break out in a rash starting on the face and chest and spreading outward.

How do I keep my kids safe?
The MMR (measles, mumps and rubella) vaccine was responsible for the eradication of measles from the United States. It has repeatedly been shown to be both highly effective and extremely safe in keeping children protected. Children are recommended to have the first dose of the vaccine after their first birthday, and a second dose after the age of 4. Avoiding travel to areas where there are outbreaks, and ensuring close friends and family members are protected against measles, will help decrease your child’s chances of getting exposed.

How do I know if I am protected against measles?
People immunized as a child with a live vaccine, like the MMR, are considered protected for life. People born before 1957, due to widespread exposure to measles before there was a vaccine, are also considered protected due to natural immunity. If adults are unsure about their immunization status, there is a blood test to evaluate whether they are immune to all three components of the MMR vaccine. Receiving the vaccine as an adult is also both safe and effective. Parents should definitely be vaccinated against measles. Infants in the United States generally are not immunized with the MMR vaccine until his or her first birthday and therefore are unprotected until that time. Because parents spend more time outside the home and interacting with other people, they are at greater risk of being exposed to the measles. If parents are not immune to measles, their likelihood of getting sick themselves and subsequently spreading it to their children is very high. If adults are interested in checking their immunization status, they should discuss that with their primary care physician.

We are traveling overseas. Do we need to take any extra precautions for potential measles exposure?
Traveling overseas with family can potentially expose you to the risk of multiple different infections. In the United States, MMR vaccination is recommended after 12 months of age, but for children traveling to potential areas of measles exposure, the MMR vaccine is recommended for a child as young as 6 months of age. This would not count for the child’s primary series but is important for him or her to receive immune protection prior to the first birthday. These children would still need to receive a dose after their first birthday, and again after 4 years of age.

If measles was declared eradicated in 2000, how is the disease back?
There have been a significant number of outbreaks across the world in areas that are frequented by American travelers. These travelers get exposed and bring the disease back to the United States. The virus is able to “take hold” in areas of decreased immunization practices, leading to significant outbreaks in our country. A small percentage of immunized individuals are also susceptible, as well as children and adults with medical contraindications to MMR immunization.

Your child’s pediatrician — and your own primary care physician — can help answer additional questions and address concerns you may have about measles and the MMR vaccine. To find the right primary care provider for your family, call 904.202.4YOU (4968).

Sources: Centers for Disease Control and Prevention and the Florida Department of Health