Laying in bed one night, my husband and I are watching TV cuddled up, enjoying the peace and quiet of sleeping kids. We start discussing the week ahead, and I ask him like I always do, what he’d like for dinner in the days ahead. (Let me say, in the last few months, I have become a total (self-proclaimed) rockstar at preparing insanely good and healthy dinners for the family.)

So when he answered my questions with, “I don’t know, I just want it to be really healthy and simple,” he ignited a raging fire inside. I immediately pull away from our cuddled up position and say “What do you mean “healthy and simple”!?!” (I’m pretty sure I used air quotations.) “I always make things “healthy and simple.” He knows I am annoyed. He says, “You know, just like not cooking the green beans in chicken broth.  I just don’t want all that sodium.”

Holy hell, you would have thought he just told me he cheated on me. “You are such an a-hole, the chicken broth I buy hardly has any sodium, and I just steam them in the broth. You are such an a-hole.” Looking back on it, I’m sure he was looking at me like I was freaking insane (which I was). I stormed out of the room and went and crawled in bed with my sleeping daughter and balled my eyes out.

Laying there, I started thinking about how psycho I felt, and that made me cry even more! I felt so out of control. I remembered being so irritated with the kids that day for no reason and I also remember getting teary-eyed over a stupid car commercial. I started doing the math… Ah. Only a week away until the dreaded start of my period.

My horrible PMS only started after my third and last child. I had my tubes tied with the last one, so I think the birth control I had been on in the past hid my raging PMS. Turns out I am not alone. Around eighty-five percent of women exhibit at least one symptom of premenstrual syndrome (PMS) before their periods. Three to five percent of women struggle with premenstrual dysphoric disorder (PMDD.) PMDD is a severe form of PMS and can be debilitating to everyday life.

Common symptoms of PMS and PMDD include:

I scheduled a visit with my OB to discuss my craziness. She didn’t think I had PMDD, but she did want me to consider getting a hormonal IUD or going back on birth control. I was not pleased with these answers because I had my tubes tied for the exact reason of NOT being on hormonal birth control.

So to the internet, I went looking for natural remedies to PMS. I came across a ton of suggestions and wanted to share what has been working for me. I will say, that though I have found ways to greatly improve my PMS (and subsequently my periods as well) I still deal with milder symptoms of PMS. Also, I am NOT even remotely close to being a doctor, so PLEASE get your doctor’s opinion if you deal with severe PMS or possible PMDD. These are just suggestions of things that have worked for me.

Magnesium: In layman’s speak, women who experience PMS have a crazy hormone imbalance. (The reason my OB wanted to put me back on birth control: to control my hormones) The higher the estrogen or progesterone, the lower the magnesium. Research has shown that magnesium levels in women with PMS are significantly lower than in women without PMS, leading to headaches, bloating, low blood sugar, dizziness, fluid retention and sugar cravings.

Vitamin B6: Vitamin B6 is critical to maintaining hormonal balance. B6 lowers estrogen levels and increases progesterone levels.  In studies, many women found it extremely helpful with depression.

Calcium and Vitamin D: Calcium and Vitamin D levels fluctuate cyclically in women during their monthly menstrual cycles with calcium absorption being the lowest during the week before you start your period. In a recent study, researchers found that women with PMS who took a 500 mg twice a day for three months had a significant reduction of fatigue, appetite changes, and depression than women who took a placebo. Among all the supplements used to treat PMS, calcium has the strongest evidence to back its benefits.

Even though you feel crummy during PMS, it’s the time your body needs exercise the most! Exercise is an awesome stress reliever and can produce endorphins that can boost your mood and help you feel less anxious. It also boosts your metabolism and helps with circulation. I try to alternate days of intense cardio such as spinning with days of strength training such as Pilates.

No one wants to hear this before they start their period, because come on, we all want to stuff our faces around the time of our periods! But, as I discussed in the supplements section, those of us that suffer from PMS are deficient in nutrients we not only can get through supplements but in our food as well! Increase fiber intake with vegetables, fruit, nuts, seeds, beans, and whole grains. Try to get more omega-3 fats in foods such as salmon and try to avoid the processed stuff that can have lots of added sugar and additives. 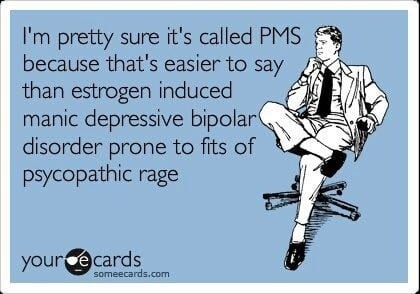 I have been eating cleaner, exercising and taking these supplements for five months. Not only have I drastically reduced my PMS symptoms, but I have also totally eliminated the excruciating cramps I used to get with every period. (Like would wake me up in the middle of the night and have to pop a ton of Advil- and then remain in fetal position til said Advil kicked in.) The heaviness and length of my period has also significantly decreased.  Plus it’s helped me lose weight!

So while I still get that huge monthly zit and might get teary over stupid car commercials, I’m calming down the crazy and won’t be getting divorced over “healthy and simple” green beans.

Do you suffer from PMS? What has helped you deal with the symptoms?