Now that I have finally (!) emerged from the fog of twin newborns, we’re into the next stage of babyhood — toddlers! I’d be lying if I said this was any easier than newborn twins, but it’s hard in a different way, as all phases of childhood are turning out to be. So here are my 10 pieces of advice and thoughts on twin toddlers — and hang on, because if you’re the mom of twins-turning-toddler, it’s sure as heck a crazy ride, even though it’s full of double cuddles and double snuggles!

1. Diapers. As in, have them within arms’ reach at all times. My twins aren’t 2 years old yet, and the thought of potty training them (something — along with teething, lice and ear infections — I believe to be, after several years of experience, one of the hardest parts of young kids) sends me straight for the corkscrew. When you have twins, there’s always a diaper to change. When you have twins who are naked, getting in and out of the pool or the bath or in the middle of a diaper change — have those diapers close, or prepare to install locker-room floors all over your house. I recall one night where four poop-cidents occurred within the span of 15 minutes: Thing 1 had a poop diaper when I was getting them in the bathtub, and while I changed Thing 1’s diaper on the bathroom floor, Thing 2 pooped in the tub. Then I got them both out of the bathroom, and while I was putting on Thing 1’s diaper, Thing 2 pooped again on the bedroom floor. Finally cleaned that up, only to find that Thing 1 had made another dirty diaper. Face palm. Also, learn how to change diapers while the babies stand up on the floor. Trust me. Then you don’t have to leave one on the changing table while the other one sprints for the stairs.

2. Hand-me-downs. Always say yes. At this point, they’re growing so fast that cute doesn’t really matter anymore — something that fits and is clean matters. So just open your arms wide for anything your fellow mom friends want to pass along to you. We aren’t too picky about things in my house anymore, long as it’s clean and it fits. 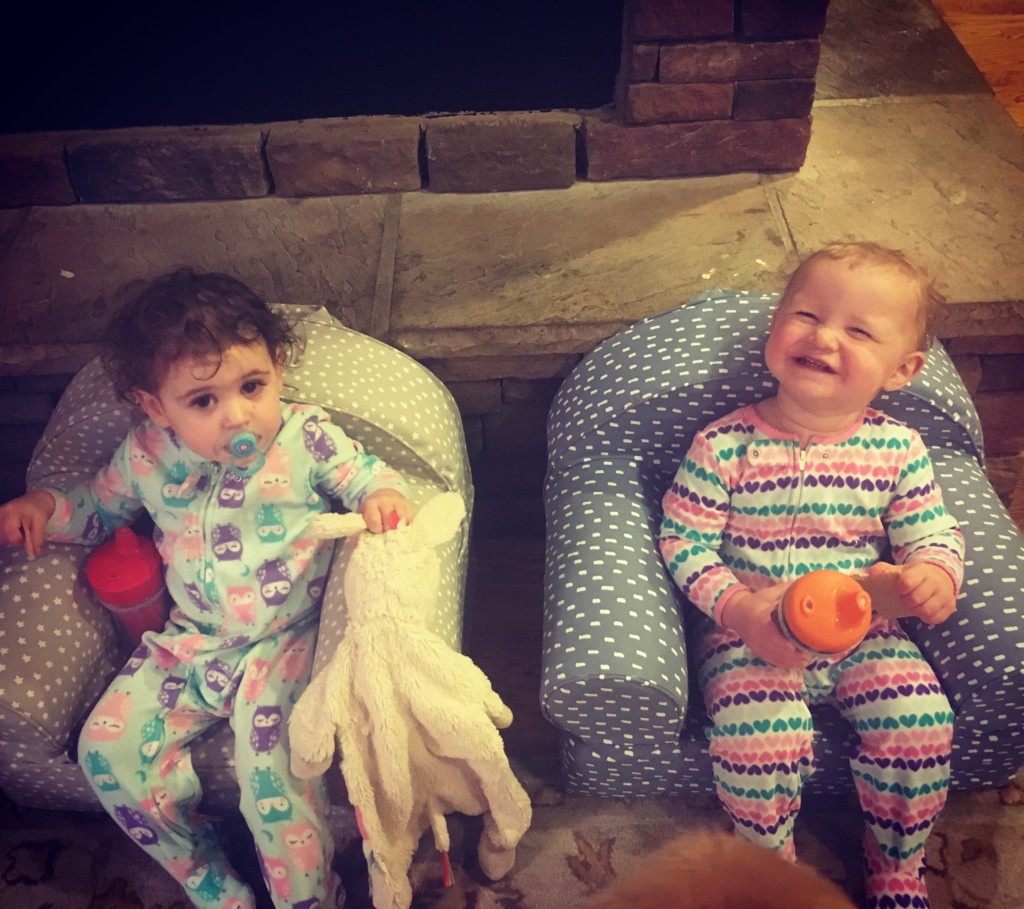 3. Camera. Have it ready, at all times. Sure they’re running in 14 directions and climbing bookcases and coloring all over the furniture with the highlighter you thought you hid, but there are also some really super sweet (and quick!) moments you’ll want to cherish for all eternity. 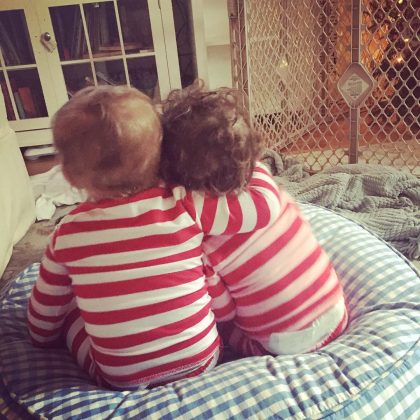 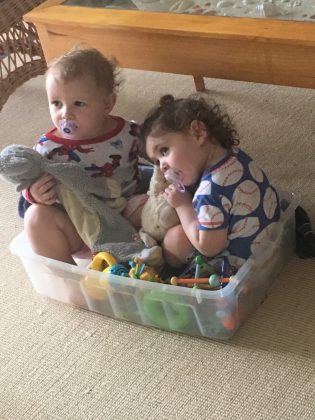 4. Plan to stay home for the next two years. Sure there’s that phase you go through where you can’t eat out with your toddler who won’t sit still but won’t let you hold him anymore. And then there’s that stage with twins. When you have two babies who won’t sit still but won’t let you hold them, and who have the ability and sheer willpower to do what they want — but no logic or a healthy sense of fear — that just spells trouble. With a capital TWIN.  If there’s no fence or it’s not a contained space, I can’t go anywhere unless I have another adult with me. It is physically impossible to keep two adventurous toddlers within a safe distance without walls or fencing. Somehow they both manage to bolt in two different directions at the same time, and usually those directions involve oncoming traffic, a large fire or a very high cliff.

5. Baby proof. Every single day. They’re growing by inches, and what one of them can’t reach one day the other can definitely reach the next. In our house there’s nothing valuable or electronic or made of paper (books) below five feet off the ground, our kitchen cabinets and drawers are empty and our counters are spotless. Because this: One toddler might be a heap of trouble, but with two — the second you put something down to help the one twin, the other twin has already destroyed your house.

6. Matching makes it easy. Hand-me-downs are fantastic. So is having matching clothes. It makes my life so much easier to know if I have a blue of one thing, I also need a pink. If there is one shirt with a gator on it, there’s a second gator shirt around here somewhere. Sure #allthematchingoutfits are super cute, but they also keep me from losing my mind. (Seriously. Two of everything gets out of control really quickly!) 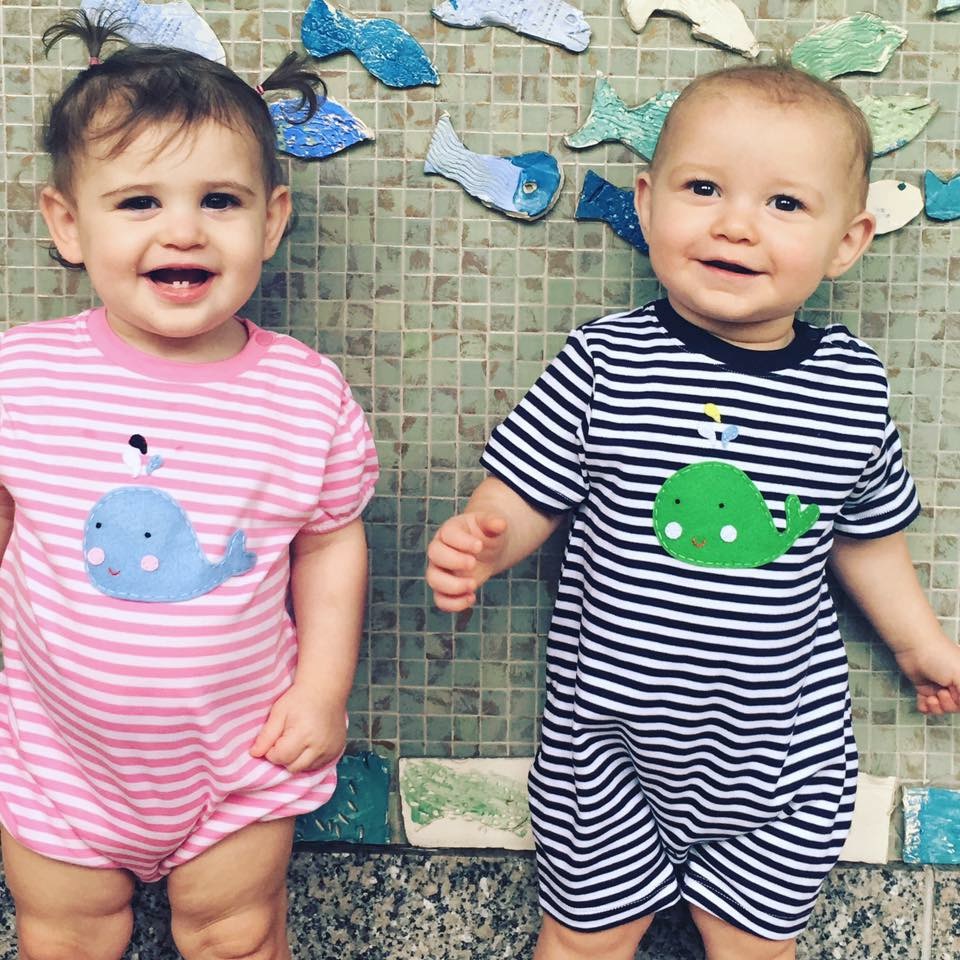 7. Sharing is a way of life. Pacifiers? Sippies? Crackers? Whatever. As long as they’re not screaming, I’ve stopped caring how often they pass a cookie back and forth. Sure they’re sharing germs — but they’re both going to get sick anyway, so you might as well get it over with as quickly as possible and hope they’re both sick at the same time.

8. The mess. Now that they can feed themselves, dinner time got a whole lot easier! Or did it? One toddler feeding himself = one cute baby and a mess. Two toddlers = 14 messes minus the cute. The best is when their seats are accidentally too close together and they start throwing food off each other’s trays while they eat their own. 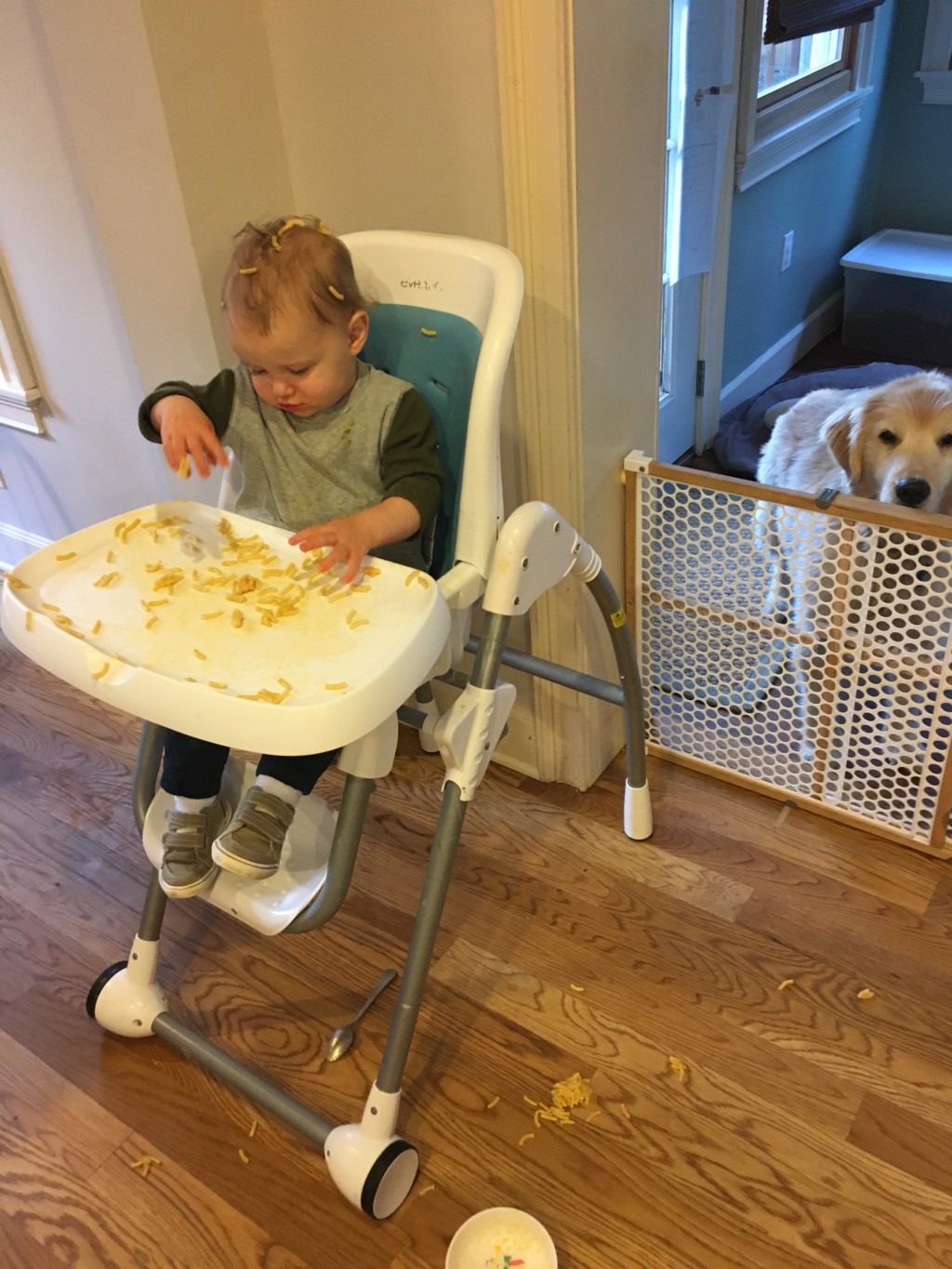 9. Keep the sleep. Keep them on that sleep schedule. Do not for one second try to change it. Nap at the same time, bed at the same time. Don’t ever take one twin somewhere in the car without the other, because if one falls asleep in the car while the other is at home playing with Daddy, one will nap and the other won’t, and then you, my friend, will get NO break.

10. Watch your pets. One night our dog got four dinners before I realized the baby gate had fallen down and the twins were having a blast feeding him over and over and over and over. Our dog is a saint, but four little hands can be tough on a pet, and so can snarfing down a double load of mac and cheese dumped on the floor. Now when the twins eat, we keep the dog in the other room, and for his sake, we never leave him and the twins together without supervision. This goes back to numbers 4, 5, and 7. There are two of them. They will always be faster than you because inevitably you’ll be pulling one off the kitchen table/back from the edge of a swimming pool/from eating poop while they other is swallowing a LEGO/climbing the dresser knobs/about to jump off the couch. 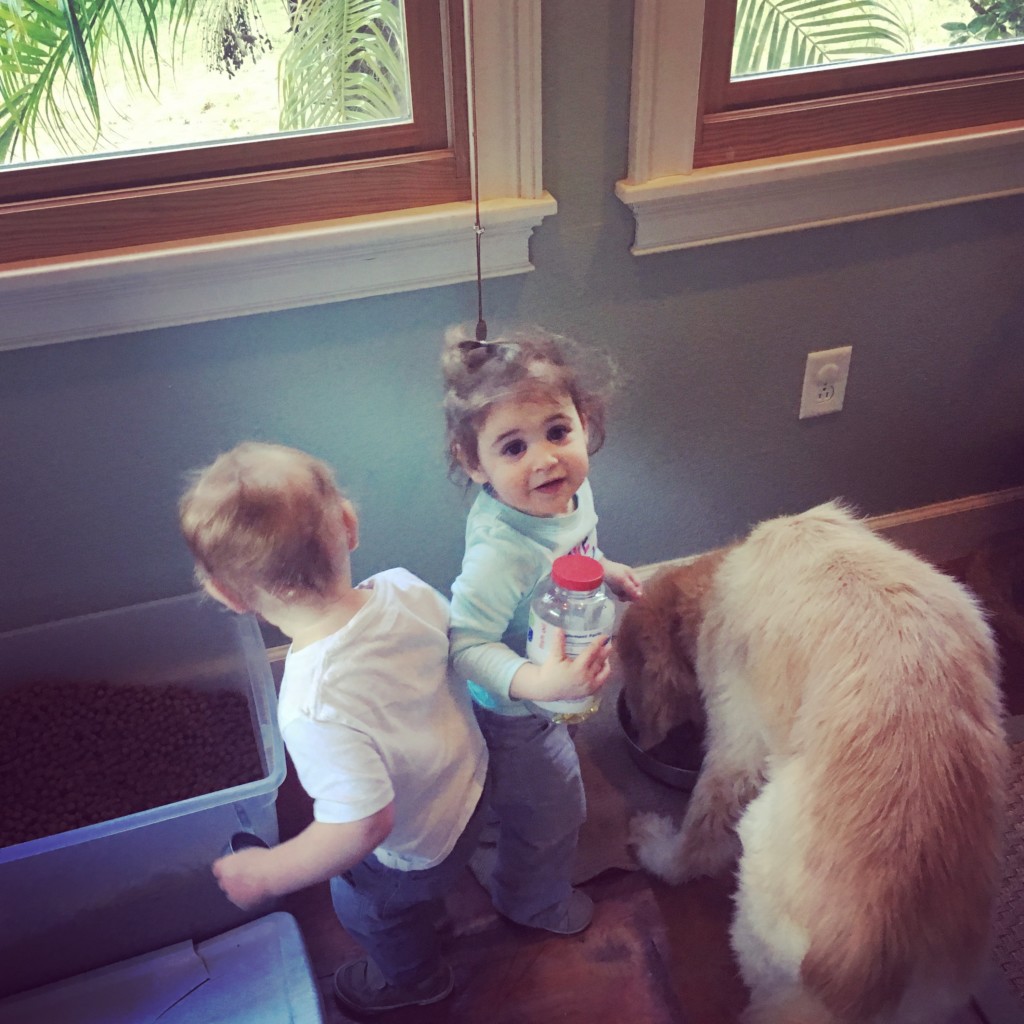 11. Cuddles. This is a bonus one. Love, love, love on them. Times two. Sure they’re a double handful, but the snuggles and cuddles with a just-beginning-to-talk toddler are about the sweetest thing God ever gave us. Times two is enough to make your heart explode. One night after we had put the twins down we heard them “talking” to each other:

That made all of numbers 1-10 totally worth it.