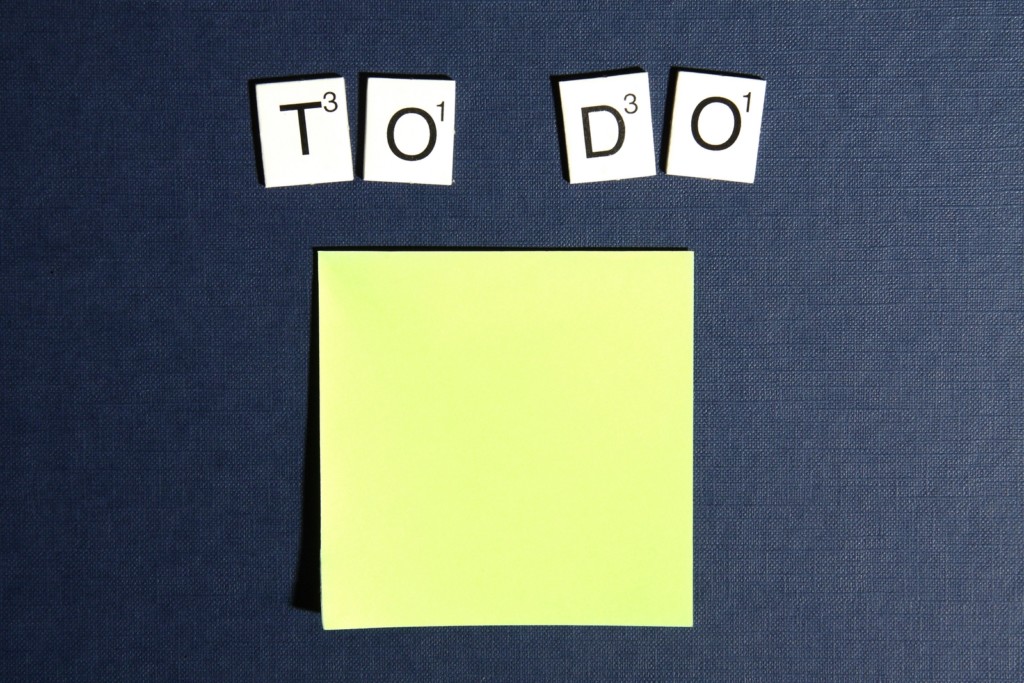 Recently, I was talking to my sister, and we had a familiar conversation about juggling jobs, kids, and commitments. She said, “I’m starting to think that all seasons are busy.” She’s right, every season is busy. Although I do wish I could cut and paste a few fall festivals and cookie swaps into a month when it seems like nothing is going on, the reality is that our plates are filled all of the time. It doesn’t matter if you have one child or 10 of them, we are all busy in our own different, maddening ways. So how do you get everything done? Good question, and I can’t help you there! But I can help you look at the small picture, break it down, and chip away at that long To-Do list that you have crumpled up in an old purse. You know the one. It’s the To-Do list that reads:

It’s the stuff that isn’t going to break your day-to-day. It’s the stuff that tends to linger. I had an epiphany a year ago when I found an old To-Do list of mine folded (I’m a pen-and-paper kind of gal) into a pair of jeans I hadn’t worn in ages. There were four words on it that made me cringe: Patch hole in ceiling. Why did this make me cringe? Because this particular To-Do list was really old, and that item was STILL pending! It made me pause to shame myself for a second before I just shrugged my shoulders. I mean, the hole was tiny. It resulted from removing the crib mobile out of my daughter’s ceiling when she got her “big girl” bed. It really was inconsequential and clearly not rocking my household to have it still looming over her room. However, why couldn’t I just get it done? Great question, that’s why we’re all here. I realized then that my current way of getting random stuff done around the house wasn’t working — my lists were only growing and spawning themselves — and something had to change.

Most To-Do lists fall into one of two categories. They encompass either:

Nonessential Tasks that nag at your soul such as backing up photos from your phone, cleaning out your makeup bag, sorting through old toys to donate, etc.

We all know you have to feed your family, and you have to provide clean clothes to wear. So when is there ever time to do all the other stuff that’s not super important but still needs to get done at some point? In my quest to figure out how to take control of everything I wanted to accomplish, my first attempt involved me taking an entire Saturday to knock out a bunch of tasks. It was the worst idea ever. It was the last thing I really wanted to do on a Saturday when I could have been spending time with my family. Attempt number two was when a very simple lightbulb went off: I laid out my handwritten list in front of me and broke it down to highlight all the Nonessential Tasks, which ironically had become the most important tasks to me since they were what I could never seem to put behind me. I realized how simple it could be, and I’ve never looked back. Just do two things. Crazy simple right? Hear me out.

Here’s what you do: First, take a week at-a-glance calendar and decide on a window of time (either early morning or at night after everyone is asleep) where you have 20 minutes. That’s it, 20 minutes. Then, on every day’s space, write in two tasks that you will plan to tackle in those 20 minutes. There’s something about physically writing down “update Christmas card list” that gets it out of my head, onto something tangible and visible, and makes me feel like I’m making headway because I’ve now got a plan. 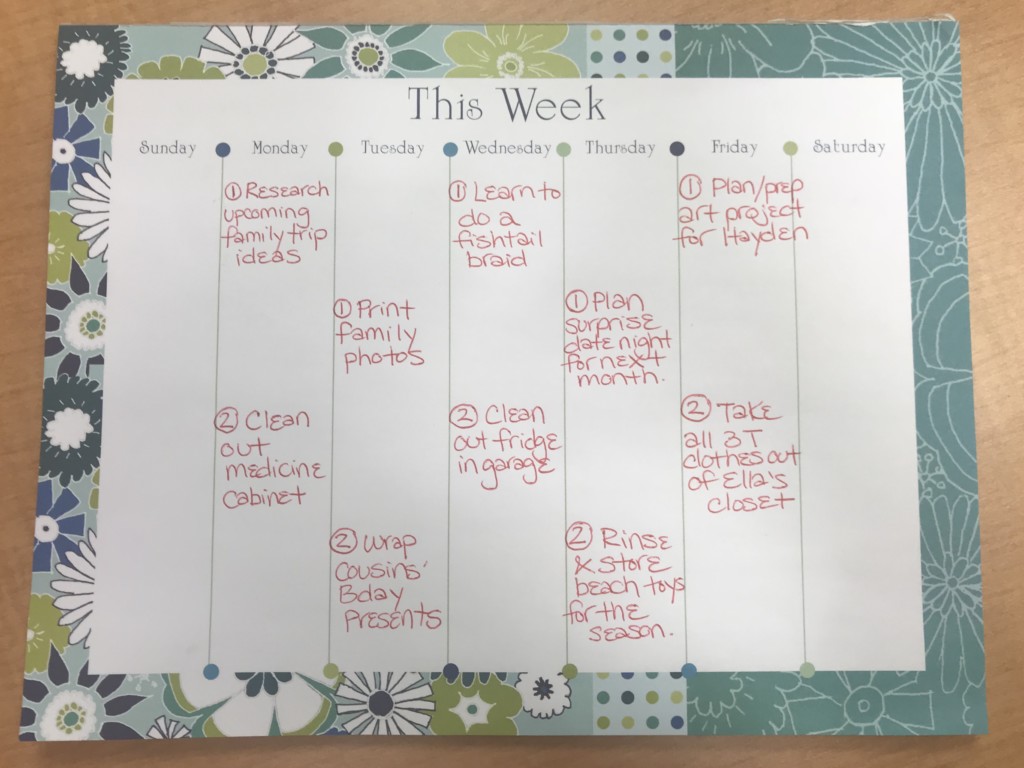 My “Two Things” rules are that your items cannot be an everyday task like doing dishes, but it also cannot be an overwhelming task like starting and finishing your 5-year-old’s forgotten baby book in one night. Your “Two Things” have to be realistic, or it won’t work. The beauty of this is it’s really hard to talk yourself out of only 20 minutes of extra work. Dedicating 20 minutes to cleaning all the papers off the front of your fridge will not upend whatever else you wanted to do that evening. But you know what it will do? It will amass 10 random tasks that you’ve completed at the end of the week. That’s 40 in a single month! Are my math skills blowing your mind?

After my first week of doing this, I was amazed. I love a good life hack and I really feel like this is one we all could use. I checked off so many different items on my list, and I truly did not sacrifice anything to fit it in. Sure, it doesn’t always go as planned. Your child is going to get sick, you’re going to be out of town, or you’re going to work late. Give yourself wiggle room! I personally don’t do anything like this on the weekends. Plan ahead, and if it just isn’t going to happen one night, try again the next day. When you make the rules, you can also bend them. I actually enjoy planning out my “Two Things” because I know it works for me. Having found a truly simple and manageable solution has taken a significant load of stress away. I know I can’t “do it all” in one day, but I also know that if I look at the small picture, the big picture really isn’t that daunting after all.