Helicopter parenting is in style right now. Go to the playground, and you’ll see parents walking every cautious step alongside their children, in case they might fall. If kids cry, then we’re often told that we need to comfort them the second the tears start flowing. We’re supposed to provide constant entertainment and interaction with our children, like homemade crafts and pre-planned activities (and never, ever give them more than a few minutes of screen time). We’re expected to hover over our children every second of every day. Me, I’m the mom who is sitting on the bench at the playground on my phone, or ignoring my kids when they cry. I’m a hands-off parent, and it works for me. 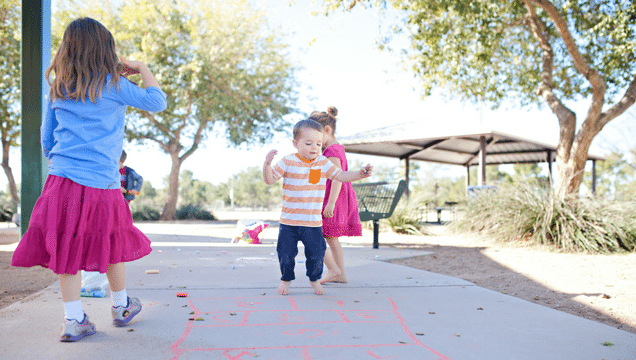 I didn’t necessarily set out to be so hands-off. With my first, it was actually the exact opposite. Ben was born, and as my first baby, I wanted to do everything “right.” By the time Wyatt came around, just 15 months later, I began to change my thinking. With my third, my hands-off parenting status was solidified. I no longer had time to plan crazy activities or homemade crafts; if I ran around cuddling my kids every time they cried, I’d literally never put them down. I literally did not have the time to hover.

It’s not that I don’t interact or play with my kids; I do. But generally speaking, I let my kids do their own thing. I don’t schedule activities for them all day. I don’t make crafts with them. I don’t come running when they cry. I don’t provide constant entertainment for them all day. But I have four kids, with another on the way, and it’s just not realistic or feasible to spend all my time catering to every last whim and need of my children. How are they ever going to learn to be self-sufficient or independent if I’m constantly hovering over them, doing everything for them, making sure they never have to learn to soothe themselves or figure out a way to keep themselves happy? Besides, one of the best things about having so many kids is that they serve as each other’s entertainment. Each of my kids has a group of built-in friends that they can play with, fight with, wrestle with, and get into trouble with every single day.

Every second of every day cannot be scheduled. Kids need to have time to figure things out on their own; to entertain themselves, to pick themselves up when they fall down. I comfort my kids when they’re upset and crying, but if they fall down and the tears start flowing, I don’t immediately run over to pick them up and comfort them. I don’t provide entertainment for them all day, nor do I schedule constant activities. If they fight, I don’t immediately intervene. That’s not to say that I never step in; sometimes, it’s necessary. But for the most part, I take a step back and try to let them come up with their own entertainment, soothe themselves when they’re upset, or work out their own disagreements. They can run loose in the backyard, or come up with games in the playroom, and as far as I can tell so far, it’s made them very happy, well-adjusted kids.

My husband and I are constantly told how well-behaved our kids are. They may behave like little monsters occasionally, but for the most part, they don’t throw many temper tantrums, they’re able to play by themselves and have great relationships with each other, and with us. Whenever people ask me what my secret is, I always tell them: it’s more about what I don’t do than it is about what I’m doing. I didn’t set out to be a hands-off parent, but you know what they say about necessity being the mother of invention. It works well, and I can already see that in the independent little people we’re raising.