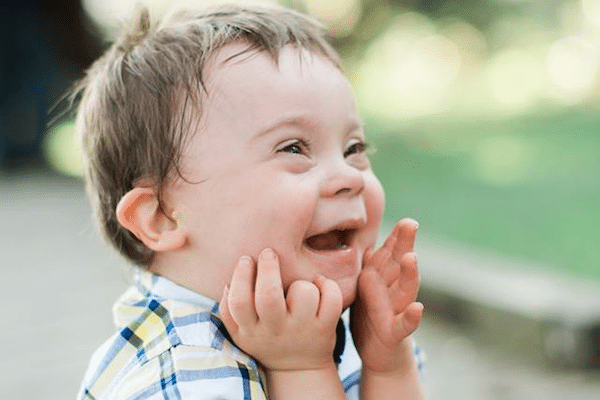 I had a conversation about Down syndrome with some friends recently, and we talked about what life is like raising a child who has it. One question I get asked pretty frequently is what the day-to-day life is like. (Normal, I tell them — for the most part, the fact that my son has a Down syndrome diagnosis doesn’t enter my daily thoughts.) One person asked me a question, though, that I don’t often ponder: What is life like for adults with Down syndrome? What does the future look like?

I’ll be completely honest, my first instinct when hearing or thinking about this topic is to immediately be consumed with fear and anxiety. The “right” answer, of course, is that there are no limits on people with Down syndrome; they can do anything any other person can do. My child with Down syndrome has the brightest, shiniest future ever.

But what if he doesn’t?

When I first received Wyatt’s diagnosis of Down syndrome, after the prerequisite mourning and adjustment periods, I initially bought into the sunshine-and-roses predictions. My kid with Down syndrome is going to break down every barrier set in front of him, I vowed. I told myself that while it might take him longer than other kids to do things, he would do them, and gosh darn it, there was no reason to expect that he couldn’t be just as independent and successful as any other adult.

Now, in real life, Wyatt is significantly more delayed that I had expected. He is 5 years old, and he’s still mostly non-verbal. He only just started calling me “mommy,” for example, and that’s only happened twice. The other words he says are few and far between, although they are cherished. He walks and sort of runs. He’s just started jumping, and he still needs help stepping up or down from a curb. His fine motor skills are extremely behind, and potty training? Ha. I’m not even thinking about that anytime soon.

What does that mean for his future? What does it mean for his intellectual abilities? To be quite frank, I have no idea. And that’s why this is so scary. I have no idea how mild or severe his cognitive delay will be, and we won’t know until he catches up more with his peers. Maybe Wyatt will be able to work, and go to college, and live independently. Lord knows there are plenty of people with Down syndrome who do. People with Down syndrome own businesses now, they climb mountains, they work full-time. But then there are other people with Down syndrome who maybe have to live with their parents their entire lives. And this isn’t the end of the world, of course. If Wyatt has to live with us, it’s hardly an imposition; he’s our son, and we love him. Because really, does it matter how successful our children are? Is that the biggest measure of their self-worth or how well we’ve done at parenting them? Ultimately, as long as he becomes a happy, healthy adult, then I can’t really complain.

But then there’s the question of what happens after we’re gone.

Luckily for Wyatt, he’s got a truckload of siblings; for all the grief we’ve received for our large family, it certainly helps in this case. Wyatt will have four siblings who, I hope, will be ready and willing to help contribute to his care once his father and I are no longer here to do so. But that still isn’t a huge reassurance. If Wyatt needs to live in a home, for example, then there is the concern of abuse — of all kinds of abuse, from physical to sexual — which people with disabilities are at a markedly higher risk for. How do I protect him from that? How do I keep him safe and healthy and whole as he ages, especially once he becomes elderly? It’s a scary thought. And it’s one I don’t know how to resolve. Wyatt is only 5, but this fear still lurks in the back of my mind, even though I literally have decades before I have to prepare for it.

This is the real-life part of Down syndrome parenting, having to constantly square your hopes with your fears. But the thing is, is it really so different from parenting typical kids at the end of the day? Wyatt may have different challenges that he’ll face along the way, and the hopes and fears may be different. But all parents have to grapple with what they hope for their children vs. what they fear for them. A child doesn’t need to have a disability for a parent to do that. So at the end of the day, it’s just another example that ultimately shows that there really isn’t much that separates us after all.

So OVER It: Mothering Through This Insanity