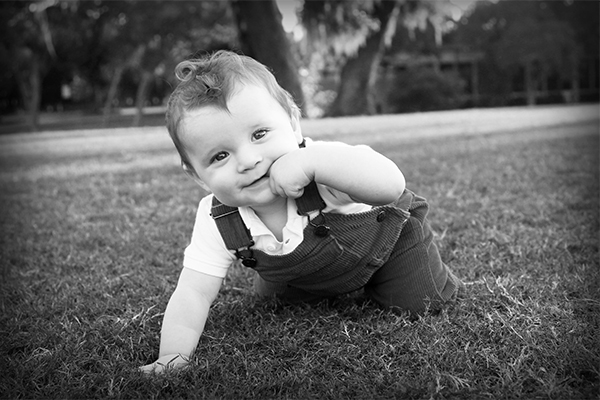 You would not know it to see me now, struggling through the grocery store with two toddlers and two older children at 5 p.m. on a weekday (always a bad decision) just for some milk, but my arms weren’t always this full. “It’s a GOOD handful!” I always cheerfully retort when someone side-eyes me and says, “Wow, you have your hands full.” What they can’t know is that six years ago, I would have given anything, and did give almost everything, to be the mama toting along two crying, snotty-nosed toddlers, a whiny 5-year-old, and an eye-rolling-like-its-her-job 10-year-old through a crowded store at dinner time.

We had our daughter easily. And then it took almost five years before we had our son. Then, to have our third baby, we went through three more rounds of IVF. Now that my third (and surprise! fourth baby) are almost three, I can look back on those dark years of fighting infertility with more perspective than I had when I was in the midst of shots and doctor’s appointments, tears and miscarriages. If you’re going through it now, know that many others have and most everyone who has is willing to lend an ear to listen and arms to cry in. Here are things I realized years later after the fog cleared.

The grief. There’s much grief in this process. There’s the grief you experience when you have a miscarriage. There’s the ongoing grief of going through the process itself, which is tidal waves of stress and anxiety, hope and loss. There’s sometimes the grief of secondary fertility which adds another layer to it all (not being able to give your child a sibling). There’s the grief of the dream you had for your family, and having to let that go. So much grief. And it took me months to name that feeling. I had no idea that not only was I sad I couldn’t have a baby, but I was also grieving the little lives lost, the dreams that went with them, and the vision and plan I had always had for what my life was going to look like. Being able to embrace and live a life you didn’t choose involves grieving the life you didn’t get to have. Those are a lot of things to grieve and process. Still now, even years later, even when my arms are full of 2-year-old, the grief I have over those lost babies can hit me with a deep sadness that starts tears in my eyes. Sometimes it rises to the surface completely unexpectedly. Give yourself the time, space and resources for grieving. And know it’s okay if it doesn’t go away. It may never.

Talk about it. At the time, I didn’t know a lot of people who had been through what I was going through. Maybe I wasn’t listening, or maybe, even though it was just eight years ago, it wasn’t such a prevalent thing to share (and Facebook definitely wasn’t as much of a presence in my life at that point, so my access to information and a community was not as easily available), but I felt so alone. Going through the endless rollercoaster of hope and failure was something I simply got tired of sharing with everyone except my husband. I figured they were tired of hearing it, and I was tired of their sadness when we experienced loss after loss. Now I see posts on Facebook about what others are going through and I always reach out to them. It takes a lot of bravery to do that and ask for help and support during the infertility journey. I wish I had been brave enough to reach out to others during this time. That is why, whenever I hear someone going through IVF or infertility, I try to reach out and check up on them and answer whatever questions I can for them. I try to be there for them. I also think there is post-traumatic stress disorder associated with infertility that is also not talked about enough or even acknowledged, but I know it is something I still feel sometimes.

Faith can be hard. Maybe you were never a person of faith. Maybe you were always. Either way, wrestling with God while you see stories of parents who harm their own children, when you’re desperate for a baby, can be devastating on top of the grief you are already feeling. People who call children “blessings” don’t understand that people who are trying to have children can hear that as “God isn’t blessing you.” To a person of faith, that can be very hurtful. My children are absolutely the most precious gifts. But I struggled with faith a lot during this time. I was angry at God. And dealing with that on top of everything else put me in a not great place. I had no idea who I was or what I believed during those dark years. Remarkably, a woman I didn’t know well but who became a wonderful friend shared all of her faith and infertility journey with not only me, but many others, simply by making it a part of her almost every interaction and conversation. Through her warmth, steadfastness and joyful faith, she drew me to her. Her willingness to share her heart and trials during her long journey was a source of strength for me and I am extremely grateful for all she taught me during that time.

Therapy can help. We didn’t start therapy until after our first round of IVF failed and, at that point, I went straight over the edge. IVF was supposed to be the “silver bullet.” And what most people don’t realize is that — it’s not. The failure rates can be as high as 50 percent, depending on age and other circumstances.  At that point, we’d been trying to have a baby for about three years and had had several miscarriages, a ruptured ectopic with emergency surgery, and multiple failed IUIs. I wish someone had said to me earlier, you need to talk to someone. In the end, it was my husband who said to me, in as loving a way as possible, “I can’t be the only person helping you through this anymore. There is nothing else I have to give you that will help. We need to go talk to someone.” I wish I had gone sooner. Sometimes getting out of your own head keeps the chaos of your heart in perspective. I learned breathing exercises and calming methods for one, but I also learned different tools for handling the grief.

Love still exists. You can find love in this process, even though it’s a heartbreaking one. Maybe it’s your partner, who never ever lets you down and makes you laugh even through the sadness. Maybe it’s the fertility doctor who shows how much she cares and cries with you. Maybe it’s your parents, a sister who’s gone through the same thing, or a host of friends. Maybe it’s the acquaintance you happen to run into at the fertility doctor who becomes a good friend. Maybe it’s people you find online who are supportive and available 24-7 in a special group or chatroom. It may be hard in the dark maze of infertility to find love, but I promise it does exist. I wish I had looked for it more during the time, although if I had read this then I would have laughed bitterly at this point when reading this post.

I know I am one of the fortunate, so fortunate, ones, to have the family we do. I am thankful every second of every day for my children. It doesn’t mean I love them more just because I had such a difficult time having them, but it does help me put things in perspective when we have a hard day. I can’t say I’m thankful for what we went through. I would never wish it on anyone. But I do know it has given me the strength to help others who are facing infertility and to let them know they are not alone, and that they are loved.