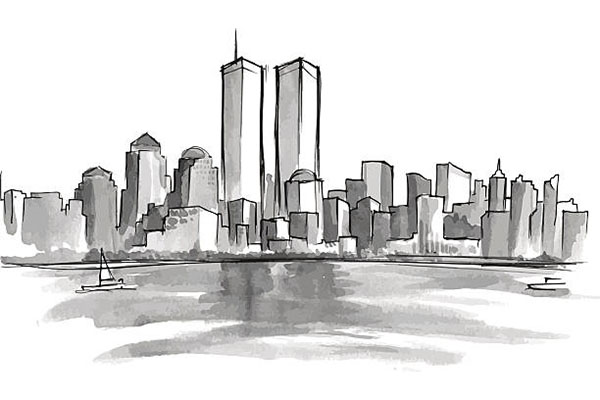 My son is really into history. He likes learning about presidents and events of the past and people who changed the world. He loves the “Where Was,” “What Is,” “Who Was,” books, that talk about big events and famous people in informative and very interesting ways. I highly enjoy reading them with him, anything from books about Pompeii and the Pyramids to Walt Disney and the Wright brothers. I usually find these books on Amazon or locally at Chamblin’s Book Mine. There are probably more than 100, so it is not hard to find one we haven’t read. I was looking the other day, and What Were the Twin Towers? came up, and I scrolled right by.

Even 21 years later, I am not ready to read about that day. I think it must be like my grandfather never talking about D-Day, unless you specifically asked. He wrote about it in a simple autobiography I have saved in my desk, but he didn’t talk about it. Words aren’t enough, I know that now. Reading a book about something that you watched happen in real-time, while in an office in downtown Washington D.C…there are no words, even for a nine-year-old boy who’s your son.

I remember getting off the Metro that morning. I was 22 and just graduated from college and at my first job. The sky was so, so blue. I noted it as I emerged from the filth of the Metro escalator and walked the four blocks to my office. It shone down between the glass buildings. I got to my cube, turned on my computer, and started work. And then the internet stopped. My job at the time was to collect news clips from different media outlets about a project my office was doing public relations for, and The Washington Post would suddenly not load. And then there was yelling, and a partner had turned on the TV mounted in his office, and we all stared, transfixed at the building in New York City on fire. And then the second plane hit as we watched the first Tower burn. And a slow realization crept over me in disbelief: “We are under attack. Is this what Pearl Harbor felt like?” But it still didn’t make sense. Nothing did. There was so little information available. No one knew what was happening. We asked each other questions and stared at the TV.

We went back to our desks. We weren’t sure what to do. And then the news started pouring out. I got on AOL IM (lol, yes, that was a thing people used) and tried to reach friends in New York. I was only a year out of college, and many, many people had headed to New York after graduation. My boss called me from our company’s other office outside the city and asked me to bring him a USB with photos on it, and I stared at the phone in my hand, incredulous. “I can’t find my friends,” I told him, a sob in my voice. “Oh. Ok. Well do what you have to do I guess,” he said.

One of my oldest friends was in New York. The phone lines were jammed, and I could not reach her. I had no idea where she lived or worked, or how close she was to the World Trade Center. Finally, I reached her mother in rural Virginia, where we had grown up. There, at least, the phones still seemed to work. She was safe. I IM’ed another friend, “You need to leave the city to be safe,” he said. “You need to go home to your parents.” “I have a job, I wrote back. I have to go to work tomorrow.” Work hadn’t even been canceled the next day.

When the third plane hit the Pentagon, we could see the smoke from our 10th-floor suite. Finally, we learned the building was being shut down. We were told to leave lest we be stranded in the office. Dreading to leave IM, the only way I could get through to people, I stayed until closer to 1 p.m. When I could tear myself away, I walked to the Metro through the empty city streets. It was a complete ghost town. Like a movie, or an alternate universe. The Metro was empty. On a weekday. In D.C. Empty. I finally made it to my apartment. One friend, I learned on IM that afternoon, had watched the third plane fly directly into the Pentagon from his office. We were stunned. No one had any words. We watched the TV in silence. Every station, every single station, showed the same burning images over and over again.

I read and read and read about that dreadful day until I could absorb no more. I read every newspaper I could get my hands on. I read websites and magazines. I read my college alumni magazine and sobbed at the obituaries of so, so many alumni who had walked the same brick paths and green lawn as me on the grounds, and who had died that day. A week or two later I received a copy of The New Yorker magazine in the mail. The cover was completely black. If you tilted it gently, a faint image of the twin towers in darker black was visible.

Many people have written about September 11th, and for that I am grateful. In everything I have read, what still stands out to me more than 20 years later is this short paragraph that was in that black-covered New Yorker. Maybe one day, when my son asks, I can read to him about that day. And I will also read him this, because, in the end, this is all that matters.

“Thousands died on September 11th, and they died for real; but thousands died together, and therefore something lived. The most important, if distressing, images to emerge from those hours are not of the raging towers, or of the vacuum where they once stood; it is the shots of people falling from the ledges, and, in particular, of two people jumping in tandem. It is impossible to tell, from the blur, what age or sex these two are, nor does that matter. What matters is the one thing we can see for sure: they are falling hand in hand. Think of Philip Larkin’s poem about the stone figures carved on an English tomb, and the ‘sharp tender shock’ of noticing that they are holding hands. The final line of the poem has become a celebrated condolence, and last Tuesday—in uncounted ways, in final phone calls, in the joined hands of that couple —it was proved true all over again, and, in so doing, it calmly conquered the loathing and rage in which the crime was conceived. ‘What will survive of us is love.'” –Anthony Lane, The New Yorker, September 24, 2001