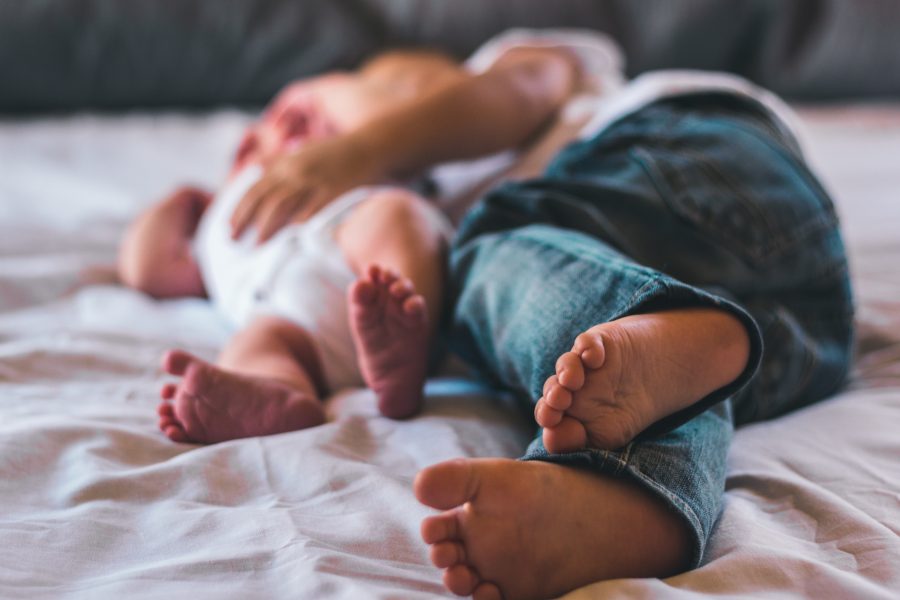 “There’s fluid in the uterus, but the lining is thick. But you may want to wait to transfer, with the fluid,” the IVF doctor said to me.

I was sitting on the table in the patient room, paper draped over me. The last frozen embryo transfer we’d done, I’d had a perfect lining, an A-graded embryo, no fluid. I’d skipped coffee and wine, done everything right. And nothing. No pink line. The frozen transfer we’d done before that one had resulted in a pregnancy that made me so sick I was throwing up constantly and I had really high hCG levels, but at my five-week appointment, there was no heartbeat. The resulting miscarriage was so painful I thought I was going to die.

We had two beautiful children. Beyond all reason, I desperately wanted a third. We were not going through another egg retrieval. If this frozen transfer didn’t work, I was DONE. Done emotionally, physically, financially. My heart was done. I was ready to move on. I looked at my kind doctor in his green scrubs. We had two frozen embryos left. Both B-rated. I had fluid in my uterus.

I also had a friend generously watching my older two kids all morning, I had done (and paid for!) all the medicines and shots to get to this frozen embryo transfer, I drank a gallon of water to make my bladder the right fullness for the transfer, and I was ready to get this over with and move on with life. My husband was in Gainesville at a Gators game. At the time, partners weren’t allowed into the room when an embryo transfer was done. Since I could drive myself home, it made little sense for him to pass up free tickets. We’d been through this many, many times before and knew even a positive pregnancy test could mean nothing.

“Put them both in,” I said to the doctor. My husband and I had agreed the night before. Our second child had arrived only after nine miscarriages, a ruptured ectopic pregnancy involving emergency surgery, five failed IUIs, one fresh embryo transfer failure, and a failed frozen transfer. There was no way this frozen transfer with B embryos on top of fluid would result in two living babies.

Ahem. There are things bigger than science.

Nine months later, we welcomed boy-girl twins. A bonus baby. An extra baby we never planned for, never occurred to us to have, and that threw our one hotel room, five-seat car life into complete disarray. Yes, there was IVF, so I didn’t accidentally get pregnant, but regardless of how many kids you wanted and how many you end up with, adding a child you didn’t plan is always a mind cluster-f*ck.

Four years later, I look at my fourth baby (at least, he was the one that came out second, so he’s considered our last baby and fourth child) and of course, I can’t imagine life without him. He is everything you’d expect a fourth child to be — demanding and busy, never takes “no” for an answer, craves snuggles like they’re a drug, is relentless in his energy and enthusiasm, drives us alternatively crazy and cracks us up, wears his heart on his sleeve, is defiant and full of love. We call him honey-badger because he just does not care. We despair of him making it to age 5 when we catch him jumping from the couch to the chair over the stone fireplace ledge. We hold the door shut when he’s in timeout and in his tantrum destroys the room. We cuddle him constantly because he always finds a way to wiggle into our bed in the middle of the night. He is extraordinary and ridiculous all at the same time. He has my heart.

As do the older three. While I was pregnant, I was completely terrified. That first year with twins was the hardest of my life. It took me, not kidding, about two years to mentally adjust to having one more child than I had ever hoped and planned for. Every second of course has been more than worth it. I went from believing I would never have a sibling for my oldest daughter to having three siblings for her. They are all incredible gifts. Especially that fourth one, the one we never planned on. How precious unexpected gifts can be in the end.

I can see now: My plan was never the right one.

The Truth About Becoming a Mom in Your Early Twenties