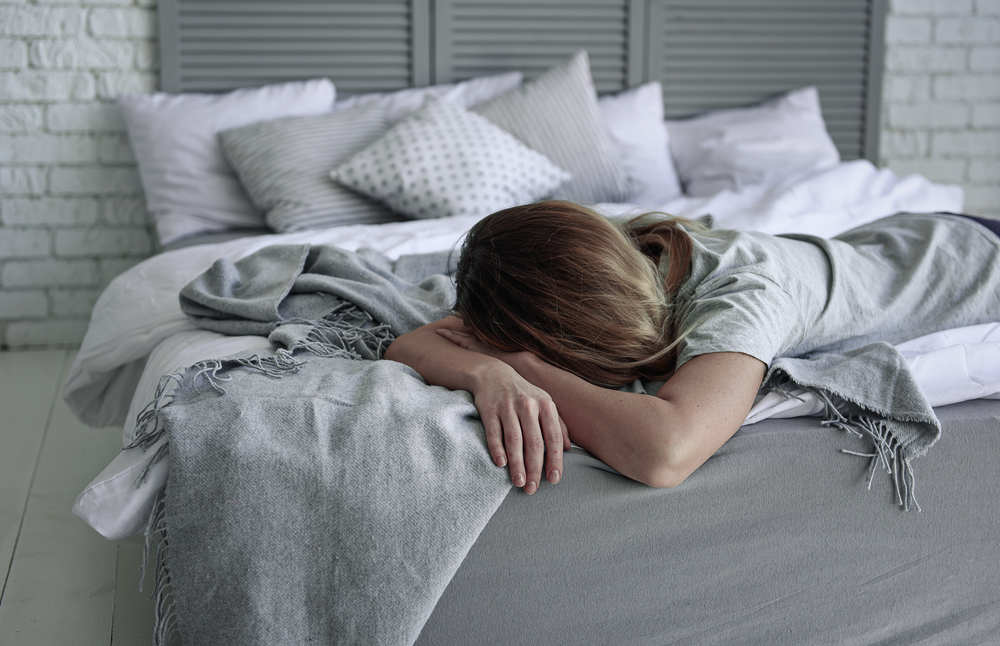 The first trimester is a beast that very few talk about. You might look totally normal on the outside. In fact, you probably do. But inside, your emotions are going haywire, you want all the bagels, and you feel as if you have the flu for weeks on end. No one is opening the door for you or giving up their seat, and you can’t park in the coveted Expectant Mother parking spot, because like I said, you look normal. But trust me when I say, you feel anything but normal. As hashtag blessed as you are to be expecting a bundle of sweet, sweet joy, it can royally suck. Especially if you’re already chasing after a toddler (raises hand). Here’s why:

You’re supposed to be excited. But you might not be. Not really, anyway. That first hour or so after you glimpsed the double pink lines (or the digital YES+ if you’re fancy)? Ecstasy. It’s what you and your partner probably wanted and worked so hard for — if fornicating like clockwork is to be considered hard work. But then the reality sets in. Nine months of total body weirdness, followed by hours of excruciating labor pains, then three months of the somewhat brutal newborn phase, and oh, God knows how many sleepless nights. The short-lived excitement is suddenly masked by sheer terror mixed with elements of dread… unless you’re more Positive Patty than Negative Nancy, in which case, go get yourself a cookie, ’cause you win, Mama.

All you want is carbs, carbs, and more carbs. Someone once told me that you crave what your body needs, and because I needed energy (of which I had none), I wanted to eat all the white things. So I did. Everything bagels, buttery croissants, linguine soaked in EVO and parmesan cheese, crackers, those delicious Trader Joe’s white cheddar puffs… you name it. And because I had zero energy, the last thing I wanted to do was hit the gym. So I was left feeling like a moody whale wearing a steadily growing inner tube around my waistline.

You feel like butt warmed over. Morning sickness is a lie. Because it’s not just in the morning. It’s constant. Seventy percent of the time, I couldn’t decide what I wanted more — to puke or to take a nap. While I haven’t really vomited since those college days, I felt nauseous most of the time, my sniffer was on overdrive (everything from my son’s Diaper Genie to Indian food made me want to lurch for the porcelain throne), and any energy I once had was obsolete — and the trusty Unisom-B6 combo can only do so much. Even my bones ached, which has been a new “symptom” that I didn’t experience the first time around. Either this is a pregnancy thing, or this is approaching 40 with a toddler.

Your hormones are raging. I say moody whale, because when I disclosed my bodily insecurities to my husband, he suggested that I “cut my salt intake.” This resulted in an argument of epic proportions for the fifth time that week because he refused to enable my geriatric ass. (Side note: Why do men always need to fix everything right here, right now? Just tell me I’m beautiful and move the f-bomb on.) This also resulted in my cursing at anyone or anything within earshot for the next hour — the dog, the cat, and the Roomba, included. And while the world has a light shined on postpartum depression (very real and very serious), what about prenatal depression? It’s a thing, trust me — Google says so. Oh, and don’t even get me started on what these ‘mones do to your skin. How you doin’, preteen acne?

You’re not supposed to tell anyone. It’s taboo to talk about it before you’re 12 weeks along. Sure, you can mention it to your nearest and dearest. And if you’re like me, you did that and then some. (Oops!) I justified it by saying I would need the support if something when awry. Which may be true. I also think I just needed a little empathy from my tribe who’s been there to live through their own version of first-trimester hell — braced with a bag of cheddar puffs for comfort.

Written during the first trimester after the author picked a senseless fight with her husband. Published a month later because obvi — and she wanted any fellow first-trimester-ers to know this is all temporary, and you’ll live through it. At least until menopause hits.

The Truth About Becoming a Mom in Your Early Twenties