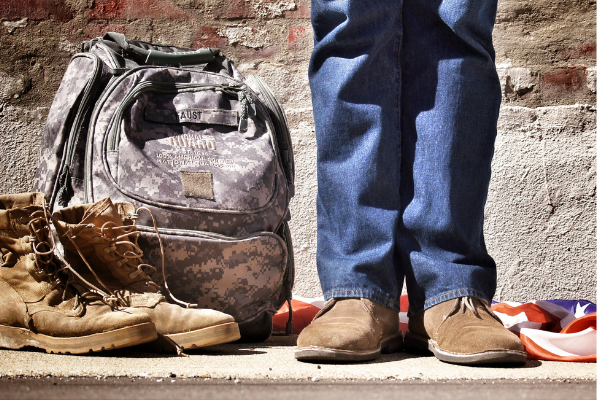 Post-traumatic stress disorder, or PTSD, is one of the most misunderstood and stigmatized mental health disorders. While anyone can get PTSD, from rape survivors to victims of a bank robbery, it’s most closely linked with military veterans — and it’s this association that has become so harmful. Because people most closely link PTSD with veterans, there is a stereotype that having it means you are violent, crazy, and likely to explode at any moment. None of this is true, but people believe it. And this is something that is personal to our family because my husband has PTSD… and because of its negative connotations, he doesn’t want anyone to know.

My husband is a combat veteran who went on multiple deployments. He was injured while on tour and saw people die. I don’t even know the entirety of what he experienced because he so rarely talks about it, but what little I do know is heart-wrenching. The things he has told me leave me shocked, unsure of what to say or how to help him heal to take his pain away. There’s nothing I want more than to help, but there’s not much I can do, except this: Hopefully make the world a little bit more understanding of what it’s like to have PTSD and to live with someone who has it.

The first thing to make clear is that my husband is not violent. Most people with PTSD are not. In fact, there is increasing evidence of a genetic predisposition to PTSD, which is why some people get it, while others do not. It’s not because the person who does have it is weak, or more prone to anger or violence. For us, it means that my husband has a harder time handling stress; he gets edgy or irritated more quickly than I do and has a harder time coping with those feelings. Usually, it passes within just a few minutes, so we’re working on staving it off simply by having him take a few minutes to breathe when he starts to get frustrated. He has had trouble managing his anger, but a combination of being purposeful with our behavior and medication has made a huge difference. It took a long time — years — to find the right medication for him, but it’s been miraculous.

It’s also like he is always on high alert. This doesn’t mean he always looks tense or on his guard; I doubt anyone would ever notice if they didn’t know him. He is, in general, a laid-back person who most people find funny and personable. Being on high alert, for him, means that he doesn’t ever want to sit with his back to the door; he wants to sit where he can see people coming and going and assess any potential threats. It means that if he sees bags of trash on the side of the highway, he will change lanes because in the Middle East, that’s often how combatants would disguise IEDs. He understands logically that the bag of trash is probably not going to be an IED — but he also figures that it doesn’t hurt to take precautions anyway. I’ve learned to just let it go; if it helps him to feel more secure and safe, then what does it matter where I sit or which lane he drives in?

He does have nightmares, although I don’t know what they’re about or how often. He’s only admitted to me that he has them. And he sometimes will have intrusive thoughts about the things he’s witnessed; he’ll sometimes talk about it, and that’s usually when the survivor’s guilt will kick in. He will almost shut down, become very quiet and emotionless, while he asks me things like, “Why did I come home and he didn’t?” Some of the people that didn’t make it had wives and kids. Others were younger than he was and their lives were just starting. Knowing this hurts my heart, but it haunts him in a way that I can’t understand.

We’ve considered getting him a service dog, but this is one of the difficulties of living in a world where people with mental health disorders like PTSD are not accepted — while legally a service dog is required to be accommodated in most places, it would be extraordinarily difficult to attend school or hold down a job in the field he works in, if not impossible. And he seems to be coping well as it is, so we’ve let that idea go. Mostly, I wish that we didn’t have a society that makes him feel like PTSD is something to be ashamed of, that he has to hide. He doesn’t want anyone to know he has it, because he knows they will look at him differently in fear or pity (or maybe both). He doesn’t want to be treated like someone who might explode at any moment, or like he is weak or fragile. He wants to be treated like himself, not like a victim or a violent threat. It’s not much to ask, especially considering how much he’s sacrificed, but apparently, for many people, it’s still too much. Just look at any media story about a veteran who did something violent — PTSD is immediately listed as a potential factor, even without any proof that the veteran in question had it. It’s shameful, and yet it persists.

The best thing we can do to help people with PTSD, whether they’re veterans or not, is to be more accepting of PTSD and all mental health disorders. These people are not broken. Don’t treat them like they are. They need love, support, and understanding. I only wish it was possible to provide it outside of our own home.

If you are struggling with PTSD, the National Center for PTSD can help.

Burpees in the Wild