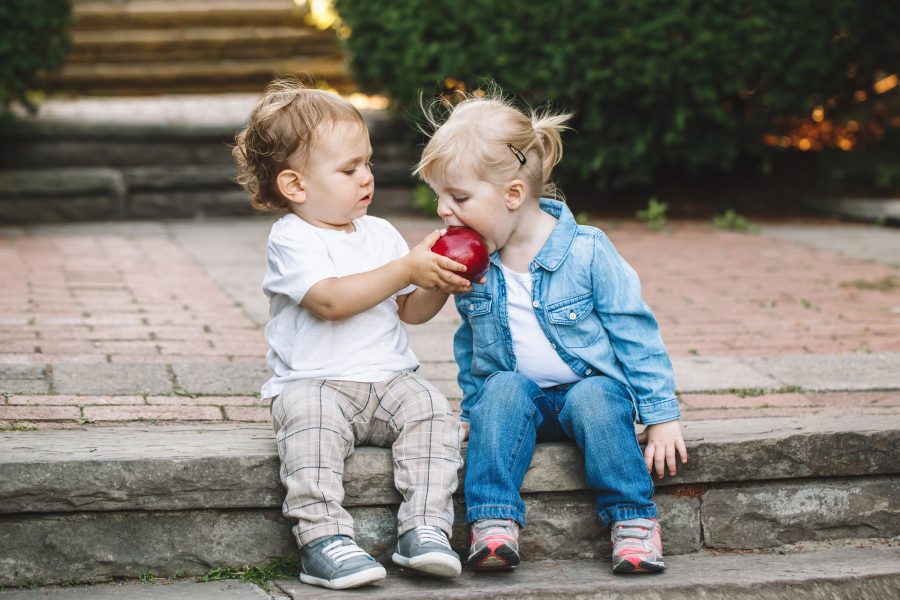 Hey, y’all! Podcast queen returns to drop some more knowledge that I’ve stolen, researched, distilled and appropriated for the purpose of helping Jacksonville moms just like me. Just before the holidays, Dax Shepherd hosted Adam Grant in his attic and interviewed the incredibly young and brilliant psychologist and professor about why humans are the way they are. An especially interesting prospect to someone who is constantly trying to understand why humans (my tiny humans, in particular) do anything at all.

Grant isn’t a parenting expert or child psychologist. Quite the opposite, in fact. He’s an organizational psychologist who makes a very good (and renowned) living telling companies like Google how to make their teams more successful. And he’s got me more convinced than ever that raising your children to be generous is incredibly important for us all.

Sharing and giving are two totally different things.
We are avid Daniel Tiger fans, but I’ve always hated that painstaking “You can take a turn, and then I’ll get it back” ditty. Even reading the lyrics here makes me roll my eyes. That song doesn’t encourage giving, it simply pacifies a whiny child struggling with the idea of considering someone else by promising them that it’ll only be for a moment. (I still love you, Daniel.)

Sharing often sparks an interesting debate among parents, with convicted opinions on both sides of the argument. A lot of people, myself included, think that it’s a fundamental concept with which you should make your child familiar as soon as possible. I did this by having two kids in two years and not cloning myself. (May or may not recommend dependent on the day.)

There are also, I’ll admit, valid reasons for why you shouldn’t force sharing; including that it encourages throwing a fit to get what you want from someone else. (I’ve certainly witnessed this from many a toddler.) But a quick survey of fellow moms all confirmed that they believe not introducing the idea of sharing will ultimately delay a difficult lesson that every human will encounter at one point or another.

We use sharing to exercise patience, communication, and creativity. I tell them that if someone you care about (a little brother, for instance) really wants to use everything you have, then sometimes it’s just really nice to let him. I’m fairly hands-off and encourage them to work it out, but they can’t snatch anything out of each other’s hands and get away with it. Sharing provides great exercises in empathy and social interaction, and though it’s a good start, it’s not exactly the kind of behavior that Grant believes makes for successful (and fulfilled) humans.

Giving means giving, at all costs. Pun intended.
Grant maintained (and it feels accurate) that it’s a lot easier to correct excessive generosity in our children than to fight the other extreme, especially as they get older. Start with something that costs very little — and I mean that both literally and figuratively. My daughter likes to color a bunch of pictures with the intention of “giving them to our neighbors,” which means walking the streets of Avondale and handing them to anyone we see. Most people are genuinely happy to receive them, and you can tell it makes her feel good in all kinds of ways.

The older she gets, the more I up the ante. We’ve now reached the point where, at the end of a playdate, she’ll find a small toy that her friend has been enjoying and sends it home to live with that friend. No strings attached. The friend doesn’t need to return it, they simply need to enjoy it. We like to talk about how happy it will make them to think of her when they enjoy her new toy. As a parent and a human, I am very opposed to creating attachments to possessions. “MINE” is not a word you hear in our house often — at least not from those above the age of 2.

And I’m not alone. I have it on good parenting authority, including Adam Grant and Janet Landsbury, that we should discourage emphasizing “stuff” with our kids. It’s tricky, to be sure. We love watching them take ownership or acknowledge that something is special to them, but it’s gone overboard. Kids bringing their toys with them everywhere — including to playdates and public spaces — which only creates an opportunity for conflict and an emphasis on the fact that things can be “mine.”

Giving is good for your kids.
This time I mean it very differently from the more altruistic rationales above. Amid his many accolades, Grant’s true focus is determining what makes humans and organizations successful. Ladder-climbing, salary-increasing, goal-meeting successful. His rudimentary, elevator-pitch explanation is that the people who end up excelling in their professional lives are, you might have guessed it — GIVERS. Side note: It’s worth investigating which type you are; a giver, taker or matcher, and what that might mean for your life and your career.

Grant mentions studies that confirm his hypothesis — that kids who are rated by their classmates as helpful end up far more successful academically. It stands to reason that those who are willing and able to assist their peers get extra practice in all avenues. It’s also compelling when you consider that Grant penned a piece for The Atlantic titled “Stop Trying to Raise Successful Kids.” But that’s another article for another day.

What are your favorite ways to encourage giving and generosity in your family?

Simone Biles May Have Walked Away From the Team Final, But She’s Still the G.O.A.T.

Let’s Make the ‘No Judgment Zone’ a Real Thing