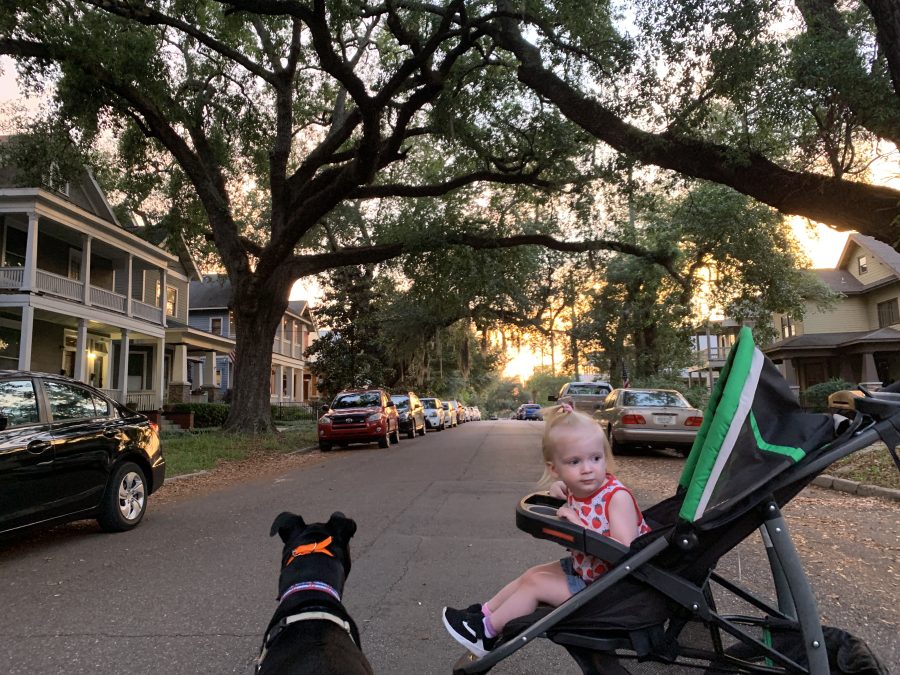 Welcome to the second feature on our local Jacksonville neighborhoods! In February, I contacted Hover Girl Properties to find out to the top five most popular, growing Jacksonville neighborhoods. I then reached out to our JM Neighborhood Facebook Groups to inquire why each resident loves calling their neighborhood “home.” (If you haven’t joined our groups now, check them out today. They are full of helpful tips from other local moms, recommended resources, and play dates to connect with local parents. There are also groups for, expecting moms, working moms and for parents of children with special needs.)

The first post that was written, Moving to Jacksonville? 8 Neighborhoods Families Love, featured planned communities that have been growing in regional popularity. We had such an amazing response also highlighting older, established communities that we had to feature those unique neighborhoods as well. They’re personally my favorite, so I am a bit more biased as they remind me of neighborhoods in my Midwestern hometown, but they are also Jacksonville residents’ favorites, showing off the spirit of each small community.

When my husband and I moved to town two years ago, we found the choice of neighborhoods to be overwhelming. My husband grew up in Jacksonville but left after high school in the mid-1990s, and the city amazed him with the growth that has occurred in the past two decades. While we were originally befuddled at what made different parts of town stand out as the right fit for us, we now realize that Jacksonville’s neighborhoods are each unique and offer their own charm to residents. It is a large city with a lot of diversity, spirit, and character. We are growing to love calling Jacksonville our home.

Let’s take a look at our local historic and established neighborhoods! 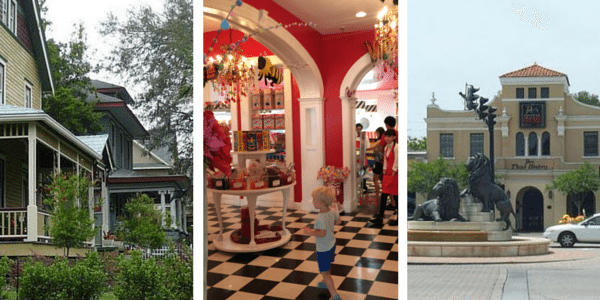 The historic Springfield neighborhood is located adjacent to downtown Jacksonville and is bordered by Hogan’s Creek, rail lines, and a commercial district. The area was established in 1869 and contains some of the city’s best examples of the 19th century and early 20th-century architecture. Springfield’s history is well-documented, and it is most recently most well-known for being an example of a booming gentrification project with even Southern Living magazine naming it the #1 “comeback” neighborhood in the South in 2010. Today, many young families are moving into the area to plant some roots in this well-rooted neighborhood with a vibrant history and up-and-coming shops, restaurants, and parks. San Marco is a neighborhood south across the river from downtown that is known for its dining district, art galleries, museums, and trendy clothing boutiques. The local preservation society lists 14 parks in the San Marco neighborhood, making this an excellent place for families and recreation. One can walk to schools, restaurants, and evenings out due to the pedestrian-friendly design of this area.

There is such a sense of community in Springfield. I have never lived in a neighborhood quite like it, and I know and love all my neighbors! There are several parties and gatherings every month for neighbors to get to know each other; in fact, my husband and I were neighbors for many years before we started dating! I also love the proximity to downtown Jacksonville. -Erin A. 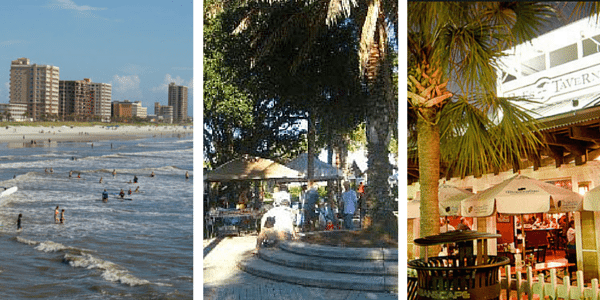 The Intracoastal Waterway (ICW) runs north-south inland, parallel to the coastline, creating an area nicknamed Intracoastal West to the west of the ICW, and the Beaches neighborhoods to the east. Atlantic Beach, Neptune Beach, Jacksonville Beach, and Ponte Vedra Beach are the four major communities that are between “the ditch,” the local nickname for the ICW, and the Atlantic Ocean. Atlantic Beach is a town that was incorporated in the 1920s and has seen development due to the constructions of the Matthews Bridge downtown and the Mayport Naval Station. The south edge of Atlantic Beach borders Neptune Beach and this boundary is filled with diverse shopping, dining options, and entertainment. The main road through the beaches, A1A, does not cut through Atlantic Beach as it does to the southern beaches areas. This creates a great, bike-friendly, family-friendly area where you can leave your car at home and walk frequently. Atlantic Beach also boasts a brand new country club (replacing the old Selva Marina) that is perfect for young families moving to the area.

I love Atlantic Beach because it is quiet and everyone is so friendly. You can always find people out walking, jogging, and out with their kids. There is a skate park by the police station and tennis courts along with a baseball field. I love that I can hear the games from my house.-Joy J. 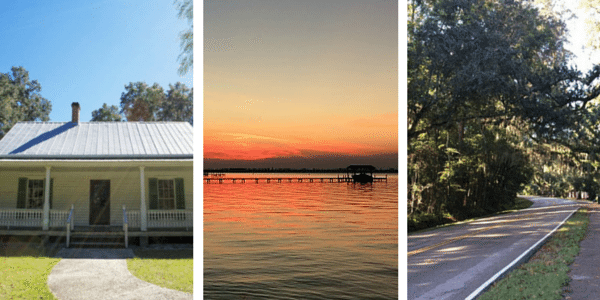 Beauclerc is a neighborhood in the greater Mandarin area that is bordered by 295 on the south, San Jose Boulevard/Scott Mill Road/Beauclerc Road on the east, Goodby’s Creek on the north, and the St. Johns River to the west. Mandarin and Beauclerc are known for their magnificent oak trees dripping in Spanish moss and amazing views of the St. Johns River. The Beauclerc neighborhood is residential, whereas Mandarin is a mix of commercial and residential areas.

I think the great thing about Beauclerc is the location…easy access to the interstate and just a short drive to other areas/amenities. San Jose is such a major artery and you can be in Lakewood/San Marco or Mandarin in minutes! I also love that although the homes are somewhat older, they are typically very spacious due to the era and style and have a lot of character. It isn’t ‘cookie cutter’ like newer developments can be. And it doesn’t hurt that many streets dead-end in the river, as well! -Elizabeth L. 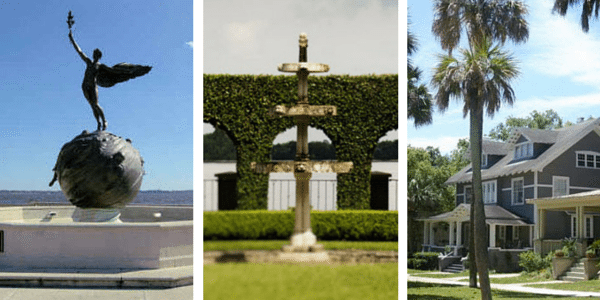 Riverside and Avondale are arguably two of the most popular neighborhoods in Jacksonville when asking people around town which area in town they prefer. The charm of the older homes (dating from 1868), distinct styles in architecture, emphasis on planning and historic preservation, and the bounty of vibrant shops and restaurants in the area create a neighborhood that many love for many reasons. Riverside and Avondale are southwest of downtown Jacksonville, bordered by the St. Johns River on the east, Fishweir Creek to the south, and Roosevelt Boulevard/CSX rail lines to the west. Distinctions between neighborhoods cannot be felt in-person as they are adjacent to each other and share many of the same positive qualities of life.

We love Riverside because of the strong sense of community. Riversiders feel a connection to one another and a love for our city. My family loves the laid back, fun, diverse culture of Riverside and that there are so many fun things to do nearby with all of the markets, festivals, parks, and restaurants. Our neighborhood is unlike any other in Jacksonville, and that’s why we have chosen to raise our family in Riverside. -Peggy S.

I don’t know about you, but I am now inspired to move to Riverside simply based on the sheer number of parks and restaurant recommendations! (Then again, I am pregnant, so I may be biased towards delicious food right now.)

What do you love most about YOUR neighborhood?

If you are interested in more information about the neighborhoods above, and more around town, please contact Hover Girl Properties, a Full-Service Real Estate and Property Management company. Co-Founders and Real Estate Agents Lara Yehl and Joy Doyle are both spouses of career military members, which involved frequent relocations with their families, so when they founded Hover Girl Properties their goal was to make others’ transitions to the Jacksonville area as seamless as possible. With millions sold in real estate transactions since its inception in 2007, Hover Girl Properties offers a full range of Real Estate services to include Buying, Selling, and Property Management. Joy, Lara, and the Hover Girl team of Real Estate Professionals are excited to assist you with your transition to and within the Jacksonville area.

Thank you Hover Girl Properties for sponsoring this post! All opinions are my own.