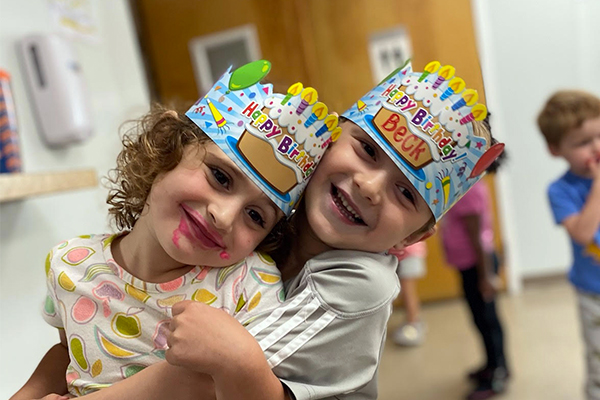 Our twins have been mostly together 24 hours a day since birth. They’re boy-girl twins — which means they’re fraternal, boy-girl twins cannot biologically be identical — so technically speaking their DNA is no more similar to each other’s than it is to their two older siblings. But, being together since birth every moment of every day truly has created a twin bond between them. The daycare and preschool they have attended is small enough that they have almost always, with the exception of two summers, been in the same class together — and this is in addition to sharing a bedroom. So when it came time to register them for kindergarten, my mama heart was torn.

Did they need to be separated? Absolutely. This I did not doubt. Once one of their teachers asked me how I handled them because she was out of ideas. When they get going together, the only solution to stop the crazy, giggles, misbehavior, and acting out is to separate them. This is manageable at home with a second parent and an extra room around; this is not possible in a single classroom with one teacher. I didn’t want them to be disruptive to their class, the other students, or place an extra burden on their teacher. And, when they’re playing together they can do that with the exclusion of playing with other children, and that isn’t fair either.

They also have very different personalities. One never stops talking (ahem), and the other regularly tells him to be quiet. One takes time and patience to show her personality, the other will share whatever he wants with whoever is within five feet of him with the true #nofilter of a 5-year-old. One is a conscientious, careful student who really loves to learn, enjoys sitting and coloring and writing and counting; the other is definitely going to need some sort of hands-on, outdoors-all-the-time, never-stop-moving kind of employment one day.

Being apart means they will have the opportunity to make new friends. Meet new people. Break up their little club of two for a while. They’ll have to figure it out for themselves, not retreat to each other, stand up for their own self, speak their own words. No one else is going to do that for them when they are in different classrooms. I hope it will give them an opportunity to develop their own little beings and personalities more, separately, instead of being one half of a whole always lumped together as “The Twins.” Being apart means they will have the chance to grow into their own lives and others will see them more as individuals.

But. Would my life be easier if they were in the same classroom? Absolutely. The logistics, the things to remember, the communication with the teacher, having the same field trip days and class parties, Valentine’s Days (UGH, double the cards for double the classmates), important dates — all of that would be easier on me. Plus, it makes me sad to think they won’t be there for one another in the same room. When one cries the other hugs. When one drops a lollipop the other shares. When one runs out of snack the other gives. So many small moments when they could be a comfort to each other in this big new school and it makes me sad to think that won’t be possible. I’m sure they’ll see each other, but they won’t interact like they have been able to for the past five years.

I supposed the only thing to do is to try it. To see how the start of school goes. While they each have already cried at the thought of being apart from each other in different rooms, I hope in the excitement of the first day maybe they won’t notice the other one is behind another, different, door. If we need to make a change, maybe we will. For right now, I think I’ve made the best decision given what I know. So much of parenting is second-guessing yourself! I can’t wait to pick them up on that first day though and ask EACH of them how their day was and hear about new friends and new experiences from them both.